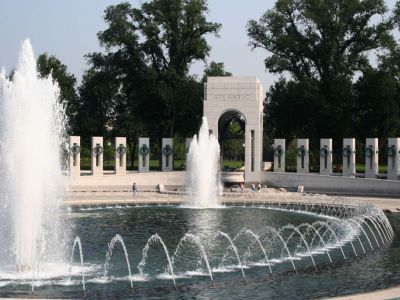 The World War II Memorial has a grand design that reflects the vastness of a war that spanned the entire globe. Two arches at either end of the memorial are symbolic of the Pacific and Atlantic areas of fighting. 56 pillars are arranged in two semicircles around both arches that represent the United States (48 at the time of the war) the District of Columbia, plus the territories of Alaska, Hawaii, Puerto Rico, Guam, U.S. Virgin Islands, American Samoa, and the Philippines.

The walls between the arches and in front of the pillars depict scenes that were typical of the Pacific and European theaters of war. These are depicted in bas relief. An engraving of the ubiquitous “Kilroy Was Here” is also present. On the west side sits the Freedom Wall that contains 4,048 gold stars each one representing 100 American soldiers who died or remain missing during WWII. Behind the Freedom Wall is the Reflecting Pool on the Mall. In front of the wall is the World War II Memorial Rainbow Pool and the stars reflect in the water. It makes for a very moving scene.

Almost 2/3 of the site is water or landscaping so the components of the memorial really stand out. The site is available for visiting 24 hours a day except around Memorial Day activities. Rangers are on hand to answer questions from around 10am to 11pm.

Why You Should Visit:
One of the more formal-style memorials, it carries a certain gravity, conveys a somber nature, and provides lots of space to reflect on the drama of WWII.
The small bronze relief panels on the walls show scenes of different wartime activities that give you a bit more insight into the lives of people during the war.
The entire site sits on a little over seven acres, so wear comfortable walking shoes.

Tip:
Entry is free but do it on a clear day if you can. On a wet day, there is nowhere much to shelter.
If you can join a guide, it's recommended to have some explanation of all the symbolism and pageantry.
Image Courtesy of Wikimedia and Jeff Costlow.