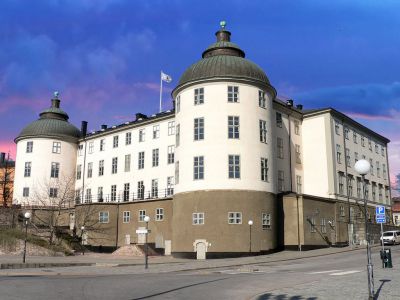 Wrangel Palace (Wrangelska palatset) is a historic townhouse mansion on Riddarholmen islet in Gamla Stan. Steeped in history, this building was constructed for Count Carl Gustaf Wrangel, and features a combination of architectural styles.

Its southern tower used to be part of the Gustav Vasa defence fortifications dating from the 1530s. Around 1630, the mansion was turned into a palace for Lars Sparre. In between 1652-1670, it was rebuilt and expanded by architect Nicodemus Tessin the Elder, author of many buildings in the Old Town of Stockholm, for Count Carl Gustaf Wrangel. In 1693, a fire broke out and the palace was rebuilt and expanded again, this time to accommodate the royal family after another fire left the Tre Kronor Castle in ruins in 1697.

Following that, Wrangel Palace remained the official Stockholm royal residence until 1754, when the Royal Palace of Stockholm was completed. During that period, it was called Kungshuset (The Kings House). From 1756 to 1928, the palace had housed Svea Hovrätt (the Court of Appeal) and Statskontoret (the State Office). In 1802, after yet another devastating fire, the palace underwent further reconstruction, led by architect C.G. Gjörwell.

Today, its walls are lavishly decorated with paintings of the royal family and their court which accentuates the regal status of the place. When in Stockholm, you may want to spend a few hours exploring this palace.
Image by Olof Senestam on Wikimedia under Creative Commons License.
Sight description based on wikipedia