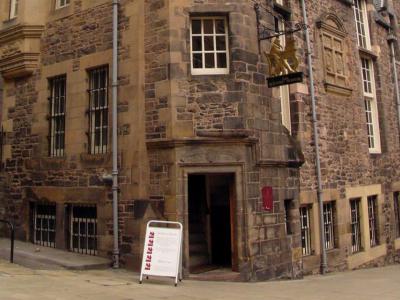 Many a people dream of being a successful author with the riches and acclaim that go with the job. A visit to the Writer’s Museum on the Mound probably won’t help anyone on this way, but it will certainly give a great insight to some of Scotland’s most distinguished writers, so you shouldn’t miss visiting it.

You will find the museum in the Lady Stair’s House in the Close of the same name. The house was built in 1622 and was bought by the Dowager Countess of Stair in the late 18th century. Her descendants donated the property to the city of Edinburgh in 1907 on the premise that they use it for a museum of some sort.

Subsequently, they turned it into a museum dedicated to Robert Burns, Sir Walter Scott and Robert Louis Stevenson, showcasing mementoes of these and other Scottish writers. The house is beautifully decorated in clear colours and gives visitors the feeling of stepping back in time.

The museum's collection features primarily the personnel items of these three great writers, including a plaster cast of Robert Burns’ skull, Sir Walter Scott’s wooden rocking horse, a book won by Robert Louis Stevenson when he was at school, and more.

You will see Scott’s personal dining room, taken from his house and lovingly recreated here, along with his chessboard and the original printing press where his Waverley novels were printed. There is also a scale model of the Scott Monument.

On Robert Burns’ writing desk you will find manuscripts and rough copies of his works, with mistakes neatly crossed out and jottings in the margins of the pages. Also displayed here are the favourite fishing rod of Robert Stevenson and the photos of his life in Samoa.

There are many temporary exhibitions displaying the works of contemporary Scottish writers, plus a terrific gift shop where you can buy copies of the writers’ books.

Makars' Court is the courtyard next to the Writers' Museum. It forms part of Lady Stair's Close, which connects the Lawnmarket with The Mound to the North. Described as an "evolving national literary monument", the courtyard incorporates quotations from Scottish literature inscribed onto paving slabs. The quotations represent works in the languages used by Scots past and present: Gaelic, Scots, English, and Latin.