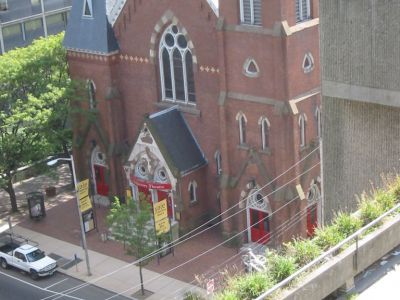 The Yale Repertory Theatre at Yale University was founded by Robert Brustein, dean of the Yale School of Drama in 1966, with the goal of facilitating a meaningful collaboration between theatre professionals and talented students. Located at the edge of Yale's main downtown campus, it occupies the former Calvary Baptist Church.

As head of "the Rep" from 1966 to 1979, Brustein brought professional actors to Yale each year to form a repertory company, and nurtured notable new authors including Athol Fugard. The more successful works were regularly transferred to commercial theaters.

Of the ninety world premieres the Rep has produced, four have won Pulitzer Prizes; ten productions have received Tony Awards after being transferred to Broadway, and the Yale Repertory Theatre was given a Drama Desk Special Award in 1988 and the Tony Award for Outstanding Regional Theatre in 1991. In 2002, the Yale School of Drama and Yale Repertory Theatre received the Governor's Arts Award from Governor John G. Rowland for artistic achievement and contribution to the arts in the state of Connecticut.
Image Courtesy of Wikimedia and Ragesoss.
Sight description based on Wikipedia.