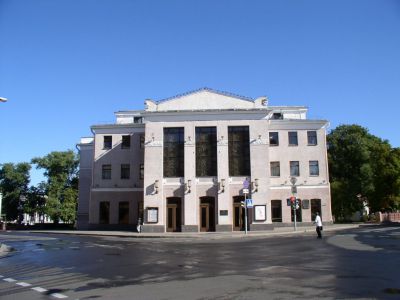 National academic theatre of Yanka Kupala is the oldest theatre of Belarus. It was opened on September 14, 1920 and it is located in a building of the Minsk provincial theatre, constructed under the project of architects Karol Kozlowski and Konstantin Uvedensky in 1890 by means of donations of citizens. In 1944 has been renamed in honor of classic of the Belarusian literature, poet Yanka Kupala.
Image by Hanna Zelenko on Wikimedia under Creative Commons License.
Sight description based on wikipedia

This sight is featured in a self-guided walking tour of Minsk, Belarus within the mobile app "GPSmyCity: Walks in 1K+ Cities" which can be downloaded from iTunes App Store or Google Play. Please download the app to your mobile phone or tablet for travel directions for visiting this sight. The app turns your mobile device to a personal tour guide and it works offline, so no data plan is needed when traveling abroad.

Minsk provides several important museums of interest. The doors are open and friendly to any visitor willing to learn more about this great city and its rich culture. Discover the unique collections and ancient artifacts of Minsk.

The Frunzensky District of Minsk

The Frunzensky District is the largest of the nine districts of the city of Minsk. It was established on April 17, 1951, in connection with the rapid post-war development of the city. Today, it offers several fantastic spots and recreation options.

The religious life of Belarus has been strongly influenced by both the Orthodox and Catholic religions. Consequently, Minsk features several beautiful churches that are well worth your time and energy while in this fine city. Take a walk down Minsk religious sights today!