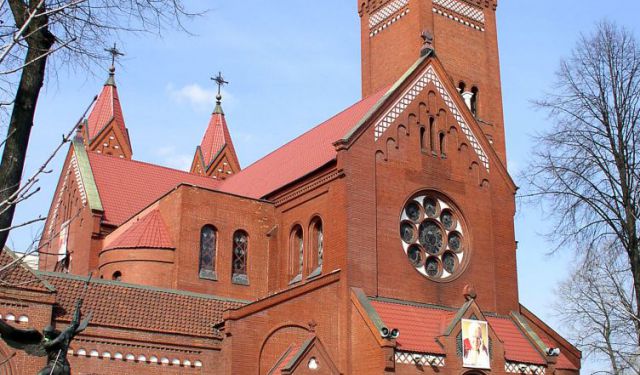 The religious life of Belarus has been strongly influenced by both the Orthodox and Catholic religions. Consequently, Minsk features several beautiful churches that are well worth your time and energy while in this fine city. Take a walk down Minsk religious sights today!
Image Courtesy of Wikimedia and Hanna Zelenko.
How it works: Download the app "GPSmyCity: Walks in 1K+ Cities" from iTunes App Store or Google Play to your mobile phone or tablet. The app turns your mobile device into a personal tour guide and its built-in GPS navigation functions guide you from one tour stop to next. The app works offline, so no data plan is needed when traveling abroad.

1) Church of Saints Simon and Helen (must see)

Church of Saints Simon and Helen, or Red Church, is a Roman Catholic church on Independence Square. This neo-Gothic church was designed by polish architects Tomasz Pajzderski and Władysław Marconi, and built during 1905-1910. The bricks for its walls were sourced from Częstochowa, whilst the roof tiles came from Włocławek. Its construction was financed by Edward Woyniłłowicz, a prominent Polish civic activist. The church was named and consecrated in memory of Woyniłłowicz's deceased children, Szymon and Helena.

In 1903, about 2,000 Minsk's Catholics wrote a petition to local authorities asking for a site to start building new catholic church. This request was satisfied, and construction started in 1905. The church was consecrated on September 20, 1910. On December 21, 1910, the church was opened. In 1923, the church was robbed by the Red Army and in 1932 it was closed down by the Soviet authorities and transferred to the State Polish Theatre of the BSSR. Before the Second World War, the church was rebuilt into a cinema.

In 1941, the German occupation administration returned to building to its original use as a church, but after the war it was again used as a cinema, called the "Soviet Belarus." In 1990, the building was returned to the Catholic Church. Since then it was renovated, and became an important centre of religious, cultural and social life. It also became a centre for the revived Belarusian Greek Catholic Church. In 2006, Edward Woyniłowicz, the church's donator who died in 1928 in Bydgoszcz, Poland, was reburied here.

Image Courtesy of Wikimedia and Hanna Zelenko.
Sight description based on Wikipedia.
2

2) Cathedral of St. Apostles Peter and Paul (must see)

The Cathedral of St. Peter and Paul is the oldest religious sight in the city. This beautiful Orthodox church was built in 1613 in honor of the St. Apostles Peter and Paul. The church was restored in 1871. The cathedral is also called "yellow church", due to its bright yellow color.
Image Courtesy of Wikimedia and Kazimier Lachnovič.
3

Cathedral of Saint Virgin Mary is a Roman Catholic baroque cathedral in Minsk. The cathedral was built in 1710 as a church of the Jesuit monastery. In 1793, after Russia's taking over Belarus, the Jesuit order was banned and the church got a local status. Soon, after creation of the Minsk diocese, the church became the local cathedral.

The Cathedral was heavily damaged in a fire in 1797, but was later fully renewed. In 1869, the Minsk diocese was liquidated and the church got a parafial status. In November 1917, the diocese was restored; Zygmunt Lazinski was appointed as a bishop. In 1920, Lazinski was arrested by Soviet authorities, the cathedral was closed down in 1934. During the Second World War, the Germans allowed the cathedral to function again, but after the war it was again closed down by the Soviets. In 1951, the cathedral's bell towers were intentionally destroyed by Soviet artillery and the building itself was given to the Spartak sports society.

In the beginning of the 1990s, religious services started again. In 1993, the building was given back to the Roman Catholics; by 1997 it was renewed. In 2005, the church was gifted a new organ manufactured in Austria. During 2000s, the frescoes created in 18th century were also restored.

Image Courtesy of Wikimedia and Petr Adam Dohnálek.
Sight description based on Wikipedia.
4

The Bernardin's Cathedral is part of the once prevailing Minsk Bernardine complex which also included the monastery Bernardine. The cathedral is located in the center of the city, near Town Hall. The monastery was founded in 1624 and has since witnessed some drastic changes.
Image Courtesy of Wikimedia and Hanna Zelenko.
5

5) Cathedral of Holy Spirit (must see)

The Cathedral of Holy Spirit, formerly the Bernardine church, was established in 1642 and completed in the 18th century. The church is both an interesting and important monument of old Minsk. The exterior presents a distinct Baroque style, while the interior offers six columns divided into three naves.
Image Courtesy of Wikimedia and Hanna Zelenko.
6

7) Church of Holy Trinity (must see)

The Church of Holy Trinity was built between the years 1861 and 1864. The church's most important attraction is the ancient icon, which illustrates the Mother of God and Jesus as well as the miraculous statue of St. Roch. Inside, visitors will discover a modern, electric organ in the music hall.
Image Courtesy of Wikimedia and Hanna Zelenko.
8

The Church of Alexander Nevsky is the only religious sight in Minsk that has been almost completely preserved from its original appearance. This orthodox church was built during the years 1896-1898 on the territory where the military cemetery once stood.
Image Courtesy of Wikimedia and Hanna Zelenko.