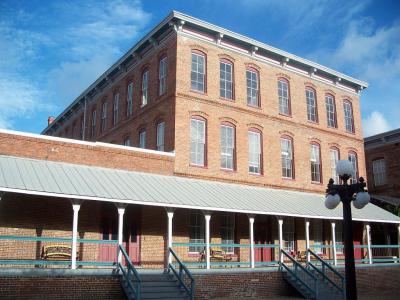 The Ybor Factory Building is a historic site in Tampa. The factory was built in 1886 by Vicente Martinez-Ybor as he moved the production of his Príncipe de Gales ("Prince of Wales") cigar line from Key West to the new company town he founded just northeast of Tampa in 1885. The headquarters of Ybor's holding company was directly across 9th Avenue in the El Pasaje building, which was constructed at about the same time.

The three-story structure was the first brick cigar factory in Tampa and the largest cigar factory in the world at the time. Over the next few decades, skilled tabaqueros (cigar makers) would roll hundreds of millions of cigars on wooden workbenches set close together in the building's wide, sunlit rolling rooms.

After Ybor died in 1896, the building was owned by a succession of other cigar manufacturers and continued to be a productive cigar factory until after World War II, when the industry (and Ybor City in general) entered a long period of decline.

Over the next few decades, the buildings were vacant, then were used as gallery and studio space for artists, then converted to a festival marketplace called Ybor Square in the mid-1970s. The Ybor Factory building was added to the U.S. National Register of Historic Places on November 15, 1972.

Today this century-old iconic landmark in Tampa is being renovated into a museum for visitors to understand Ybor City's once-thriving cigar industry.
Image Courtesy of Ebyabe.
Sight description based on Wikipedia.