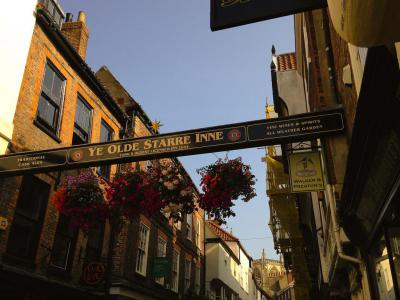 Ye Olde Starre Inne is one of York’s most historic pubs. It also claims to be the oldest and longest serving in the city, with its timber-framed main block built in the mid-16th century and a wing to its left added circa 1600. The pub's licence has been continuous since 1644 and its advertising sign has hung proudly over Stonegate since 1733.

Originally, the inn was called "The Starre", honouring King Charles I, as per the then landlord’s Royalist stance in the English Civil War. Sadly for the landlord, after the Royalist defeat, the Roundheads gradually invaded the property and made use of its 10th-century cellar as both a hospital for the wounded soldiers and a mortuary.

In the early-18th century, and then in the late-19th century the place was extended and renamed Boddy's Inn. In 1954, it became a Grade II listed building.

Among the surviving internal features here are an early-18th century staircase, some 17th- and 19th-century panelling, an assortment of benches, stained glass, and other elements.

The pub’s spectacular views of the upper part of York Minster make it well worth visiting, not to mention the huge choice of real ales and good old English food. Also, the depths of the cellar are said to be infested by ghosts.

The local resident spirits include a massive figure of Royalist officer from 1644, donning a beaver hat, doublet and smart breeches; two black cats – probably buried alive, bricked up, in the large pillar in the bar (a strange custom at the time); and an old lady seen slowly climbing the stairs – the apparition witnessed only by children. Also, from time to time, there are bloodcurdling screams of pain heard downstairs – probably from the suffering Civil War soldiers who met their end there.
Image Courtesy of Wikimedia and Malcolmxl5.
Sight description based on Wikipedia.