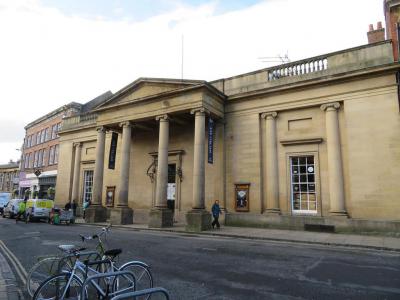 The York Assembly Rooms is a listed historical building and one of the most influential pieces of architecture of the early 18th century. Perhaps the earliest example of neoclassical design in Europe, the Rooms emerged as part of the city’s new wave in design replacing the dark Gothic style.

The building was masterminded by Richard Boyle, Lord Burlington, as an establishment of leisure for the upper class after a group of York’s gentry approached him with a request to create a place to accommodate dance parties, card games and other social activities.

Burlington, a talented practitioner of the English classical architectural movement, known as Palladianism, produced a stylish interpretation of an ancient Egyptian Hall for festivals based on an illustration by the 16th century Italian architect Palladio, featuring theatrical interior of Corinthian columns and bays, contrasted by the elegantly simple exterior.

The Assembly Rooms' construction lasted from 1730 until 1735. Nonetheless, the building was first used already in August 1732, during race week, and soon became a model for formal reception rooms in country houses throughout Britain.

In the course of history the edifice has been altered several times: first after a fire in 1773 – with alterations to the Lesser Assembly Room; then in 1791 – with the steps in front of the portico replaced by an internal set; and, finally, in 1828 – with a new façade.

In 1925 the building was purchased by York Corporation, who fully restored it in 1951.

Currently, the Assembly Rooms are used as a restaurant.
Image Courtesy of Wikimedia and Jhsteel.