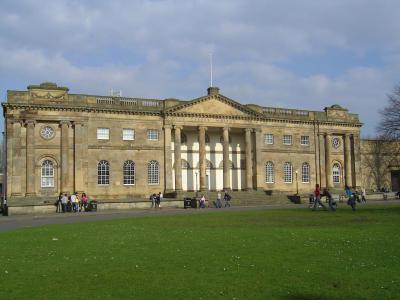 York Castle Museum was built on the site of York Castle. York Castle was originally built by William the Conqueror in 1068. However, York Castle fell into ruins, and two prisons were built using stone from the ruined castle.

The Raindale Mill was moved to the museum grounds in the 1960s. This reconstructed 19th-century flour mill was used to grind grain into flour.

The museum was founded in 1938 by John L. Kirk. Kirk had a large collection of Social History items he wished to display, and the City of York decided to collaborate with him. Kirk recreated a Victorian street to display his various Victorian items. The Toy Stories exhibition focuses on the history of children's toys. The Sixties exhibition tells the stories of that radical decade. The Cells tells stories of life in The Debtor's Prison and The Female Prison. 1914: When the World Changed Forever commemorates World War I. Finally, Shaping the Body: Food, Fashion & Life focuses on the fashion industry.

The York Castle invites visitors to step back in time and immerse themselves in Victorian History. Instead of seeing objects in glass cases, visitors can see historic items set amongst a shopping street.

Tip:
Try to time your visit with the half-hour guided tour through Kirkgate (very interesting and informative) and take some 20p coins to have a go on the machines from the old days.