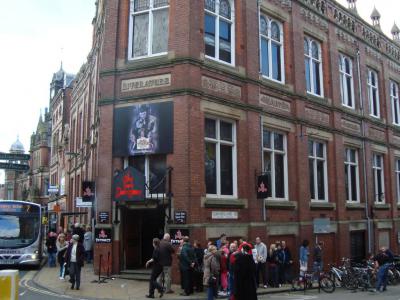 The York Dungeon depicts local horrible history using actor led shows, special effects and displays of models and objects. Opened in 1986, it was the second Dungeon attraction created, the first being the London Dungeon in 1974. Like the London Dungeon, it was designed as a live-action interactive horror show loosely based on factual events throughout history.

The dungeon operates on the basis of tours which start every 7 minutes and last between 1 and 1.5 hours. In these tours, visitors are led around a sequence of shows and exhibitions which are loosely based on historical events and practices.

Why You Should Visit:
Atmospheric and realistic. The actors are very good and the stories are entertaining. Some surprises and audience participation used well.
At the very least, you get an insight into some of the poor living and health conditions that folks had to put up with along with the barbarity of those in power.

Tip:
Pre-book online so you can turn up at your time and just go straight in; otherwise, risk being turned away or waiting in a lengthy queue.
Image Courtesy of Flickr and bazzadarambler.
Sight description based on Wikipedia.