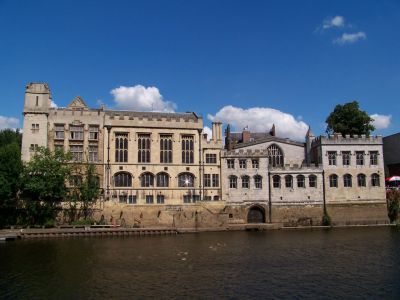 York Guildhall is a municipal building located behind York's Mansion House. It is a Grade I listed historical building. The building was constructed as a meeting place for the City's guilds between 1449 and 1459.

Richard III was entertained in the building in 1483 and the guildhall was the venue for the trial of Margaret Clitherow, a catholic martyr, in 1586. it was also the place where a ransom of £200,000 was counted before being given to the Scots in payment for the release of Charles I in 1647 during the English Civil War. Prince Albert, the Prince Consort to Queen Victoria was a guest of honor at a Royal banquet in the building in October 1850. At the north end of the guildhall was a stained glass window painted by Henry Gyles in about 1682.

In 1811 a building, designed by Peter Atkinson the younger as a council chamber, was erected to the south of the original hall (this is now known as "the Atkinson Room"). Then in 1891, another building, designed by Enoch Mawbey, the city surveyor, accommodating a larger council chamber, was built to the north of the original hall (this building is now known as "the Municipal Offices"). The new council chamber was decorated by Kendal, Milne and Co in the 1890s.

Because of damage sustained during an air raid in 1942, the present Guildhall is a rebuilt version of the 15th century building, opened by Queen Elizabeth II in 1960. The original stone walls, however, remain intact, as well as the Inner Room and its paneled walls, masons' marks, two hidden stairways and decorated ceiling.
Image Courtesy of Wikimedia and Kaly99.
Sight description based on Wikipedia.