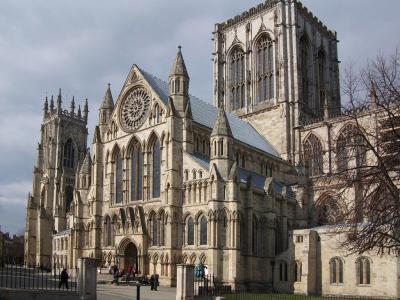 The York Minister is an impressive cathedral with a long and storied history. The Romans settled here and named the area Eboracum in 71 AD. King Edwin was baptized in a small wooden church here in 625. A stone church was built, and King Edwin was buried in the stone church in 633. In 1088, a new Minister was built. The Minister was expanded between 1154 and 1225. In 1328, the York Minister hosted a royal wedding between King Edward III and Philippa of Hainault.

Richard Scrope, Archbishop of York, was accused of treason by Henry IV and beheaded in 1405. His tomb lies in the Minister.

The Minister as it stands today was completed in 1471. It is the second-largest Gothic cathedral in Northern Europe. The name "minister" harkens to Anglo-Saxon missionary churches. The cathedral's official name is the Cathedral and Metropolitical Church of Saint Peter in York.

The Minister features majestic architecture, including a Gothic nave and a Perpendicular Gothic quire. The 1408 Great East Window is the largest expanse of stained glass in the world. Each lancet in the magnificent Five Sisters Window is 53 feet tall. A gorgeous rose window graces the south transept. The design of the west window is known as The Heart of Yorkshire.

The transepts feature wooden roofs. The nave was completed in 1350 and is England's widest Gothic nave. The central tower is 235 feet tall (72 meters). The choir is 102 feet tall (31 meters). The octagonal Chapter House was built in 1280 and features wonderful stone carvings.

Visitors can view the remains of the Roman fort in the cathedral's museum.

The York Minister is one of the most impressive churches in Northern Europe. It was one of the few Catholic churches not destroyed by Henry VIII, as he wanted to convert it to an Anglican church. The soaring nave, impressive towers, storied history, and Gothic architecture are the highlight of any York visit.

Go for an evensong service, usually held in the evenings at 5:15 pm, and experience the acoustic wonders of the choir and organ.