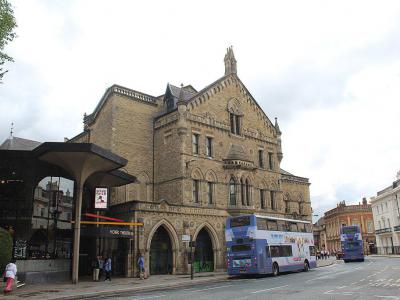 The York Theatre Royal was built in 1744 on the site of the medieval St. Leonard’s Hospital. Parts of the old hospital can still be seen, including archways and walls. Under the stage lies a well, which is believed to be from the Roman era. Under the direction of Tate Wilkinson, it attracted many of the finest actors of the period, including John Philip Kemble and his sister Sarah Siddons, Dorothea Jordan and Elizabeth Farren.

In the late 1800s, it was refurbished in the Victorian style, including the addition of a Victorian Gothic frontage, which is decorated with carved heads representing Elizabeth I and characters from Shakespeare’s plays. Following a £6million redevelopment, the theatre reopened in April 2016 with a new roof, an extended and re-modelled front of house area, a refurbished and redecorated main auditorium and with major improvements to access and environmental impact.

Why You Should Visit:
While the entrance is modern and functional, the theatre itself has maintained all of its historic charm and the variety & quality of shows for children as much for adults are excellent.
The new café created downstairs, with glass windows looking out through the gothic arches, offers the expected cakes and drinks at very reasonable prices.

Tip:
If you only do one pantomime performance, make sure it is the one here – quite unique and an experience you won't forget.
Image Courtesy of Wikimedia and Chabe01.
Sight description based on Wikipedia.