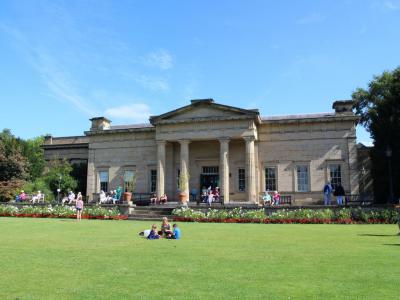 The Yorkshire Museum opened in 1830 and is one of the oldest museums in England. The museum invites visitors to explore thousands of years of York history, permanent collections, and traveling exhibitions. The museum has many displays that kids will be fascinated by, as well. Garden enthusiasts will love exploring the extensive Yorkshire Gardens.

The permanent biology collection features flora, fauna, and insects. Two Great Auk specimens are on display. These flightless birds are extinct but were similar to modern-day penguins. Other extinct animals on display include the moa, passenger pigeon, and Dodo. Alan the Dinosaur is very popular with kids.

The geology collection includes fossils, minerals, and rocks. The astronomy collection is housed in the observatory located in the museum gardens. The archeology collection has almost one million objects dating from 500,000 BC to the 20th century. Items are from York and Yorkshire and represent the Roman, Anglo Scandinavian, and Medieval eras.

The Roman collection includes a statue of the god Mars, inscriptions from the Roman Ninth Legion, and an interactive display showing daily Roman life. There are also several hoards of various ancient Roman coins. A Medieval shrine of Saint William of York, the Middleham Jewel, and the Cawood sword are all found in the Medieval collection.

The Starr Carr Headdresses are a fascinating attraction. These headdresses are 11,000 years old, and the exhibition sheds light on the lives of York settlers of old. The exhibit also includes the Starr Carr pendant, the oldest Mesolithic piece of art in Britain.

The museum has a monthly lecture series and a popular yearly Eboracum Roman Festival.

Tip:
Be sure to see the amazing Middleham Jewel (a most amazing medieval goldwork) and the beautiful old library with first editions of well-known and historically significant books.