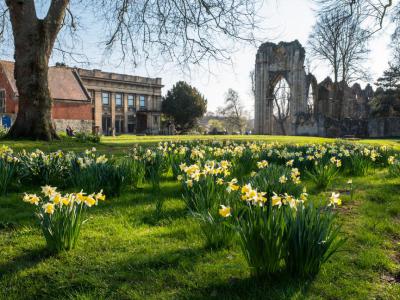 They were designed in a gardenesque style and contain a variety of species of plants and trees. There are several historic buildings in the gardens. They include the remains of the west corner of the Roman fort of Eboracum which contains the Multangular Tower and parts of the Roman walls. In the same area, there is also the Anglian Tower, which was probably built on the remains of a late Roman period fortress. During the Middle Ages, the Anglian Tower was expanded and the Roman walls were incorporated into York's city walls.

Most of the other buildings dating from the Middle Ages are associated with St Mary's Abbey, including the ruins of the abbey church, the Hospitium, the lodge and part of the surviving precinct wall. The remains of St. Leonard's Hospital chapel and undercroft are on the east side of the gardens.

The Yorkshire Philosophical Society constructed several buildings in the gardens during the 19th and early 20th century, including the Yorkshire Museum and its octagonal observatory.

The gardens are a very calm area with plenty of places to sit and appreciate the ancient architecture. The beautiful surroundings and Roman remnants offer plenty of photo ops. A variety of events take place in the gardens throughout the year, such as open-air theatre performances and festival activities. Best of all, the admission is free.