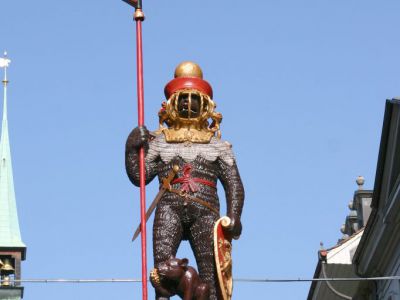 It should not surprise anyone that there is a fountain dedicated to the founder of Bern, Berchtold von Zahringer.

The Zahringerbrunnen (Zahringen Fountain) was built in 1535 as a memorial to Berchtold von Zahringer. According to legend, Zahringer was searching for a site to build a city and said he would name the city after the first animal he killed during a hunting expedition. He killed a bear on the Aare peninsula where he later built the city and named it Bern, or Bear in German.

The statue is a bear in full armor, with another bear cub at his feet. The armored bear carries a shield and a banner, both emblazoned with the Zahringen lion.

The basin below the fountain bore the date 1542 until 1889. 1889 was the year when the entire basin was replaced, and the column and figure were repainted. The current basin is an exact replica of basin under Pfeiferbrunnen (Bagpiper Fountain).
Image Courtesy of Wikimedia and Mike Lehmann.
Sight description based on Wikipedia.