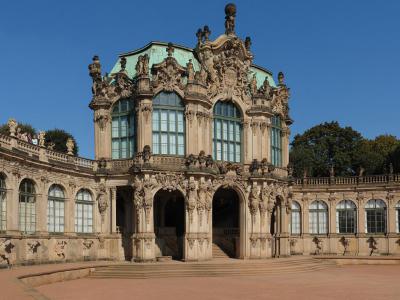 The Zwinger is one of Germany's most impressive Baroque buildings. August the Strong commissioned the complex after visiting Louis XIV's Versailles Palace. The palace was designed as an orangery, garden, and festival area. Architect Matthäus Daniel Pöppelmann designed the palace, which was built between 1710 and 1728.

The Zwinger name refers to an area between defensive walls. In the 15th century, Dresden had a Zwinger garden in between the city walls that supplied the royal court with fresh produce. The present-day Zwinger is in a different location, but the new palace kept the old garden's name.

The Zwinger was primarily a royal entertainment venue and features ornate portals and extravagant fountains. Sculptor Balthasar Permoser’s Nymph's Bath is one fine example of the Zwinger's fabulous Baroque fountains.

Other attractions include an Atlas sculpture on top of the western pavilion. In addition, a carillon with 40 porcelain bells plays every 15 minutes. The chimes change every season and feature melodies by Vivaldi, Mozart, Bach, Wagner, and Weber.

The Zwinger hosted a royal wedding in 1719 when Augustus the Strong’s son Frederick August married Maria Josepha, the daughter of Habsburg emperor Joseph I.

The courtyard garden and pond were added in the 1820s. The gallery wing that now houses the Old Masters Gallery was built in 1855.

The Zwinger was heavily damaged during World War II bombs. It was reconstructed during the 1950s. The Zwinger houses three museums, including the Old Masters Gallery, the Porcelain Collection, and the Mathematical and Physical Instruments collection. The Zwinger and its gardens are open to the public.
Image Courtesy of Wikimedia and Kolossos.

The Neustadt (New Town) of Dresden is a central district located on the north bank of the Elbe. Despite the name, this part of the city is not at all new and has been inhabited for as long as the Old Town on the opposite side of the river. Its “novelty” derives from "Neue Königliche Stadt" (New Royal Town), which is the title given to the area, formerly the district of Altendresden,...  view more

If there is one thing Dresden is particularly famous for, it is the magnificent architecture. Although known primarily for its Baroque buildings, the city has several other architectural styles present too, such as Renaissance, Historicism, Modernism and Post-modernism.

Much of downtown Dresden was destroyed in February 1945 by Allied bombing, which in turn prompted the rebuilding of the...  view more

Dresden was likely settled on the banks of the River Elbe by Neolithic tribes as far back as 7,500 BC. But it also has a long and storied history as the long-time capital of Saxony. The Electors and Kings lived here for centuries, appointing the city with every cultural and artistic treasure.

Its modern form--and its name--comes from early Germanic people, who expanded East to mine the Ore...  view more