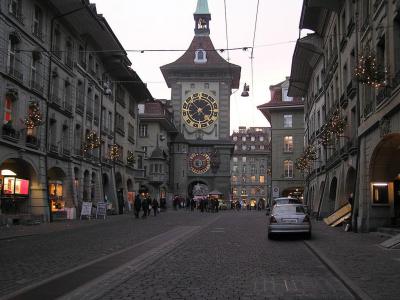 Built in the early 13th century as a gate tower for the city's western fortifications, Zytglogge has served over the years as a guard tower, prison, clock tower, center of urban life and civic memorial. Despite the many renovations it has undergone in its 800 years of existence, Zytglogge is one of Bern's most recognizable symbols and, along with its 15th-century astronomical clock, a major tourist attraction.

Like any similar clock throughout Europe, the one at Zytglogge has moving pieces that go through a small routine every hour. Father time flips the hourglass, the carpenter strikes the hammer on the bell, and several other small animations make their hourly dance; however, this dance does not start at the top of the hour! In order to see the animations, make sure you arrive at least five minutes before the hour as the dance starts four minutes prior and a crowd will gather.

Why You Should Visit:
To experience a wonderful example of the Swiss tradition of timekeeping – how often do you see an 800-year-old clock?

Tip:
The animation is best seen during the higher numbered hours (e.g. 12 at noon), but keep in mind that mass transit (buses & streetcars) does not stop during that time so beware of traffic at the intersection.
There's also a daily tour (except in winter months) at 2:30pm provided in English, German and French – pre-book it online! They take you up inside the tower to the different levels and explain the history and inner working – very interesting!
Image Courtesy of Wikimedia and Tilman-AB.
Sight description based on Wikipedia.