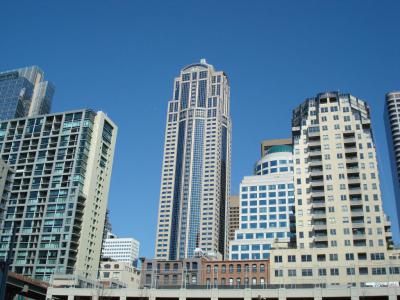 Formerly known as the headquarters of the financial company Washington Mutual, this skyscraper located at 1201 3rd Avenue is the second-tallest building in Seattle after the Columbia Center and the eighth-tallest on the West Coast of the U.S. Standing at a height of 235.31 meters (772.0 ft), it was built on the site of the 12-story Savoy Hotel which was imploded in 1986; however, the architects were able to incorporate two aluminum castings from the Savoy into the tower's design. Another building on the same block, the historic Brooklyn (Hotel) Building was retained and this too was factored into the tower's design.

It was the first major office building built under Seattle's 1985 downtown zoning plan, which called for height limits, interesting profiles, and height and density bonuses for public amenities to create a 24-hour downtown. The tower took advantage of all the height bonuses for public amenities that the 1985 plan called for including an entrance to the Metro Bus Tunnel, retail space, day care, public plaza, sculptured top, hillside public escalators, and lobby/atrium public access, as well as donating $2.5 million for off-site housing. By providing the amenities the designers were able to add 28 stories to the tower and almost double the base floor area ratio of the site.

The NY Times named it one of the three best new office buildings in the U.S. in 1988, and the May 1989 issue of Architecture Magazine called it "perhaps the best recent addition to any U.S. skyline". Paul Goldberger said of the tower, "The building seems proud of its height; for all its classical elements it has a certain sleekness, and in this sense it is characteristic of our time, at least in intention, for it bespeaks a desire to combine the formal imagery of classicism and the energizing aura of modernity."

Seattlites have voted the 55-story skyscraper as one of their favorite buildings. It is also home to a perch for Peregrine falcons, who are monitored using a public webcam that was installed in 1994.
Image Courtesy of Flickr and Cody Logan.