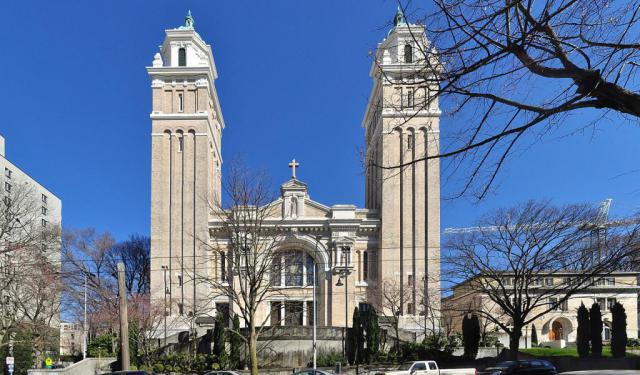 Seattle's religious buildings play a very important role in the city's social life. Besides their religious functions, the buildings are an important part of the city's architectural and artistic heritage. This walking tour will lead you to some of the most beautiful religious buildings in Seattle.
Image Courtesy of Wikimedia and Joe Mabel.
How it works: Download the app "GPSmyCity: Walks in 1K+ Cities" from iTunes App Store or Google Play to your mobile phone or tablet. The app turns your mobile device into a personal tour guide and its built-in GPS navigation functions guide you from one tour stop to next. The app works offline, so no data plan is needed when traveling abroad.

The church building was designated a Seattle Landmark in 1976 and has also received state landmark status. It was added to the U.S. National Register of Historic Places, in 1991.

Image Courtesy of Dranster.
Sight description based on Wikipedia.
2

In 1984 the City Council declared the cathedral as a City Landmark. Visitors are welcome to view the artistic treasures of the Cathedral by going on the tours that are conducted every Wednesday.

The First Presbyterian Church of Seattle was organized on December 12, 1869, by Dr. George F. Whitworth who also served as the third president of the University of Washington. Dr. Whitworth was a preacher who had come to the frontier Puget Sound area by wagon train and canoe in 1853. Initially the church had seven charter members, six women and one man.

The new congregation gained members quickly and by the turn of the century its membership grew to almost 500. The current building was built in 1907. This historic urban church features a beautiful architecture. The Seattle First Presbyterian Church is one of the largest Presbyterian Churches in the US.
Image Courtesy of Flickr and Joe Wolf.
4

This City Landmark in Seattle is located at 1714, 13th Avenue. The cathedral is built in the traditional vibrantly colored Russian Orthodox Church architectural style.

The St. Nicholas Orthodox Cathedral was built by Russian emigrants who fled Russia during the Russian Revolution and the Japanese occupation of Manchuria and settled in Seattle in 1932. It served as the beacon of the Russian orthodox worship and culture in the American Northwest. The church was consecrated by Archbishop Tikhon of Western America in 1937 and dedicated to St. Nicholas, the Wonderworker of Myra in Lycia. The church also served as a memorial to the executed Tsar Nicholas II and all the soldiers who died defending the faith, Tsar and country during the revolution.

Visitors can view the service at the cathedral on Saturday evening and on Sunday mornings. The choir is sung a capella and attracts many visitors especially on Sundays. On the 2nd week of October, the St. Nicholas Cathedral hosts an annual Russian food bazaar with stalls serving traditional Russian food and a Vodka tasting bar.
Image Courtesy of Wikimedia and Joe Mabel.
5

The First African Methodist Episcopal (FAME) Church in Seattle grew from a small Sunday gathering to the Church building that is now located on 14th Avenue. When the church was first built, the street that is now 14th Avenue was called Jones Street. Historically FAME was known as the Jones Street Church.

In 1886, prominent African American Seattle resident, Seaborn J. Collins who later became the first African American to be elected to office in Kings County started a small Sunday school gathering. All African American Seattle residents were welcome at the gathering. As the congregation grew, an old house was purchased at 1522 Jones Street in 1890 to serve as parsonage and place of worship. When the premises required expansion to accommodate larger congregations, a new building, the present First African Methodist Episcopal Church was constructed in 1912. Two lots north of the church were purchased for future expansion and a separate parsonage was established.

The FAME church is the oldest house of prayer founded by African Americans in the Pacific Northwest and has grown from a small gathering of 17 deeply religious individuals to a congregation of over 2000 members. The church from its inception till today conducts social and religious programs to help and support people from all sections of society.
Image Courtesy of Wikimedia and Joe Mabel.
6

Named after the German Jewish philanthropist Baron Maurice de Hirsch, the Temple de Hirsch Sinai is a reform Jewish Synagogue and the largest reform congregation in the Pacific Northwest.

The Temple de Hirsch was founded in Seattle in 1899 and celebrated its centenary in 1999. The first congregation was small and as the members increased, the cornerstone for a new establishment was laid at Boylston Avenue and Marion Street. This new building was not raised higher than the basement. In 1907 a larger site at 15th Avenue and Union Street was purchased for the purpose of building a larger temple to accommodate the large and growing reform Jewish congregation. In 1908, construction on the building was completed and the new temple was dedicated. The organ was donated by Babette Schwabacher Gadzert, the wife of the Jewish Mayor of Seattle in 1876, Bailey Gadzert. In 1960 a new larger sanctuary was built by Temple de Hirsch for a larger congregation designed by Benjamin Marcus Priteca, John Peck and John Dettie. The new sanctuary is located at 16th Avenue and Pike Street.

The Temple de Hirsch Sinai has a long history of preserving and promoting Jewish ethical and moral concepts and for providing outreach and community service including promoting education and life-cycle events.

Seattle’s oldest standing church, the Immaculate Conception Church was established by the Society of Jesus in 1891. The Seattle University stands on the site of the first church building. The present building at 820, 18th Avenue was constructed in 1904.

The Immaculate Conception Church building has a record of being built in a period of six months. The brick Italian style construction has a wooden roof and twin towers with gold cupolas. The design was by Williams and Clark. All the frescoes covering the wooden ceiling were hand painted by the Jesuit priests in the 1920s and at one time the building had the biggest auditorium in Seattle. The grotto designed by William Morgan in 1930 is small but exact replica of the Lourdes grotto in France.

The church was dedicated by the then Bishop of Nesqually, Edward O’Dea 1in 1904. In 1929, the Jesuits transferred the church to the Diocese of Seattle and the dynamic Rev Theodore Ryan became its pastor. Monsignor Ryan remained the pastor till his death and a pipe organ known to be the finest in the Northwest was donated in his memory.

The Immaculate Conception church was declared a City Landmark because of its architecture and the service rendered in educating all sections of the population through the history of Seattle.
Image Courtesy of Wikimedia and Joe Mabel.