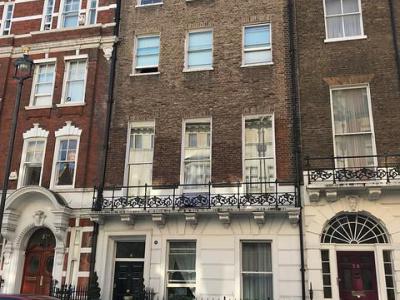 In 1963, at the height of Beatlemania, this is where Paul McCartney moved into and stayed for almost 3 years as a guest of the upper-class Asher family. He was given a room at the top of house at the back – almost a self contained apartment with a bed, easy chair, record player and small piano.

While living here with his then 18 year old girlfriend, Jane Asher, Paul wrote many of the Beatles’ most famous songs including their first American number one “I Want To Hold Your Hand”, which was conceived in the basement – Jane’s mother’s music room. “Yesterday” was also apparently written there on the family piano, after Paul famously woke up from a dream with the tune in his head and wrote it down. The song has been covered more than any other in the history of recorded music.

Paul eventually split from Jane Asher in 1968 when she came back from a trip to the US to find him in bed with another woman. Not long after this, they announced the end of their engagement and he soon started seeing the photographer Linda Eastman who would eventually become his wife... and, within a year, it was the end of The Beatles.
Image by Matt Brown on Flickr under Creative Commons License.