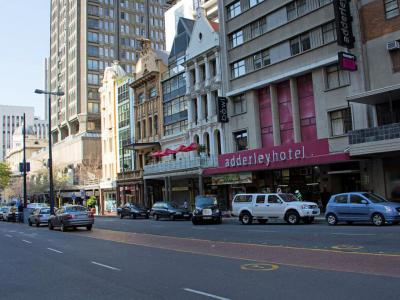 If you want to do some up market shopping while you are on holiday, you should go to Adderley Street, which is the main street in Cape Town’s downtown district.

The street runs from Heerengracht to the entrance of Company Gardens, after which it becomes Government Avenue. It was named after the British Member of Parliament, Charles Bowyer Adderley, who fought against the British Government’s plans to turn the Cape are into a penal colony like Australia.

The street is full of shops, restaurants and offices. At night markets flourish and during the day a permanent market in the square in front of Central Station sells leather goods and curios. You will also find the famous Flower Market where freshly cut flowers have been sold on this spot for over 100 years.

Along the street there is the entrance to the Golden Acre, which is the oldest shopping centre in South Africa. Another building of note is the Groote Kerk on Church Square. At the end of the street you will discover the Slave Lodge Museum.

In front of the museum’s entrance is a statue of Jan Smuts, who was a member of the British War Cabinet and who helped create the Royal Air Force. From 1919 to 1924 and from 1939 to 1948 he was the Prime Minister of the Union of South Africa.
Image by warrenski on Flickr under Creative Commons License.

This sight is featured in a self-guided walking tour of Cape Town, South Africa within the mobile app "GPSmyCity: Walks in 1K+ Cities" which can be downloaded from iTunes App Store or Google Play. Please download the app to your mobile phone or tablet for travel directions for visiting this sight. The app turns your mobile device to a personal tour guide and it works offline, so no data plan is needed when traveling abroad.

It's not difficult to dive into Cape Town history, since the most notable museums are almost all located in or close to the city center. Take this tour and immerse yourself in Cape Town's history and culture.

Set against the backdrop of the majestic Table Mountain on the southwest coast of South Africa, Cape Town is a busy destination, much popular with tourists. Other than the good climate, picturesque surroundings and well-developed infrastructure, the city is noted for a multitude of historic and cultural attractions. To see the most prominent of them, follow this orientation walk and enjoy your...  view more

This green inner-city suburb of Cape Town is very popular with tourists. It dates back to 1652 when the first garden was opened. A number of cultural and architectural sights are located within this district. Take this tour to enjoy a picturesque and artsy walk through the gardens of Cape Town.