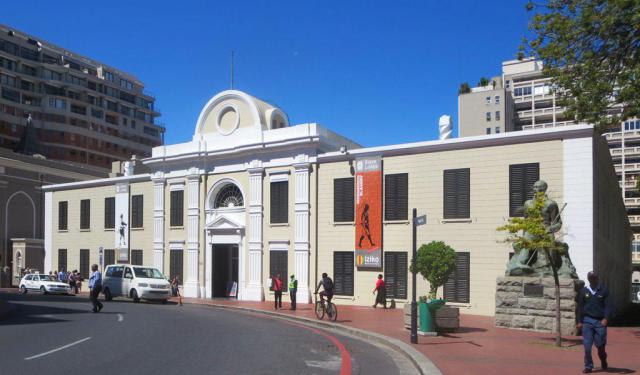 Garden House, originally a shabby tool shed owned by the Dutch East India Company, was converted into a two-story residence to lodge a new governor appointed in 1679. Later additions to the building gave it the Neo-classical appearance seen today.

That same year, the Dutch East India Company built the Slave Lodge to house slaves imported from South-East Asia and Africa amid a labor shortage in the then Dutch colony. Needless to say that, back in the day, the lodge was a rather unsanitary and cramped place.

The walls of Cape Town's old buildings have witnessed much over the last four centuries. If you wish to immerse yourself in the history of the city and hear some of the tales its ancient houses have to tell, take our self-guided walking tour.
Image Courtesy of Flickr and David Stanley.
How it works: Download the app "GPSmyCity: Walks in 1K+ Cities" from iTunes App Store or Google Play to your mobile phone or tablet. The app turns your mobile device into a personal tour guide and its built-in GPS navigation functions guide you from one tour stop to next. The app works offline, so no data plan is needed when traveling abroad.

The Bo-Kaap Museum's building dates back to the 1760s. It's the oldest unchanged house in the area. The Bo-Kapp Museum celebrates the Cape Muslims' culture, which prospered in this area after the abolition of slavery in the 1834. The museum was founded in 1978.

The museum is furnished as a typical 19th-century Muslim dwelling and celebrates Islamic culture. The "Cape Malays" were known as skilled artists, carpenters, and scholars. The old Cape Dutch feel is accentuated by yellowwood floors and ceilings. The teak door frames, window frames, and shutters are representative of the traditional local style.

One of the rooms is beautifully decorated as a bridal chamber and features a bridal dress. Visitors will also find examples of Quranic calligraphy, historic photographs, and Islamic art.

Another exhibit is dedicated to the convicts, slaves, and free workers who built Cape Town over three centuries. This exhibit focuses on pre-apartheid racial discrimination.

Koopmans-de Wet House is a former residence and current museum in Strand Street, Cape Town. The house became part of the South African Museum in 1913 and was opened to the public on March 10, 1914. It was declared a National Monument under National Monuments Council legislation on November, 1 1940. It is the oldest house museum in South Africa.

The facade of the building speaks of strong Neoclassical influence, with four pilasters, the inner ones topped by a pediment. It dates from slightly before 1793 and has been attributed to the French architect Louis Michel Thibault, although this attribution has not been proven. The portal has a teak and plaster architrave, a shaped teak transom and projecting lantern. Banisters are of teak with stink-wood returns. The ceilings are of teak throughout.

The Old Town House was built in 1755. It was one of the first two-story structures built in Cape Town. This beautiful Cape Rococo-style building features a three arch portico, white and yellow plasterwork, and gorgeous fanlights.

The Old Town House is also known as the Burgher Watch House; it was built on the site of a former fire watch house. The building housed the Burgher Senate, then a magistrate's court. It served as a police station, and next became City Hall. It finally became an art gallery in 1916 and is home to the Iziko Michaelis Collection of 17th-century Dutch and Flemish paintings.

This impressive collection of old masters was donated by Sir Max Michaelis, who wanted art students to study great art without leaving South Africa.
Image Courtesy of Wikimedia and Ossewa.
4

The Slave Lodge is located on the corner of Wale and Adderley Streets and is an interesting museum to visit as it pays tribute to the thousands of slaves brought to Cape Town between the 17th and 19th centuries.

The lodge was built in 1679 and it was here that the Dutch East India Company housed up to a thousand slaves in unsanitary, cramped conditions. The original lodge had no windows and was built of unadorned brick, but today it is a smart, white-washed building that tells the story of the African and Asian slaves who lived and worked in the city.

Through interactive displays, you will learn about slave family roots, their way of life and how some of them settled in the city after winning their freedom.

The museum has a small but excellent collection of Egyptian artifacts that date back to 3050BC, including silver items, textiles, toys, and tools. You can admire a superb collection of Greek vases and ceramics, pottery and cuneiform tablets from the Roman occupation of the Near East.

Between 1811 and 1911 the lodge changed hands several times: it was a post office, a public library, a small prison, and the Supreme Court. In the courtyard, you will see the tombstones (but not the graves) of Cape Town’s founder, Jan Van Riebeeck and his wife Maria.

If you are interested in architecture and history but don’t want to visit museums, then you will be happy just to photograph De Tuynhuys from the outside, as it houses the offices of the State President and is not open to the public.

It is rather hard to imagine, but in 1675 this building was a rather shabby tool-shed, owned by the Dutch East India Company. At the time there were few splendid buildings in the Cape Town area, which was a basic supply station for Dutch ships passing through the Cape of Good Hope on their way to the Far East and India.

In 1679, when Simon van der Stel was appointed as the Commander of this growing outpost, there was a bit of a panic about where to lodge him. As the tool shed was the only unoccupied building, it was hastily enlarged into a two-storey house with a flat roof and a large veranda.

By 1751 it had become the summer residence for succeeding governors and had been refurbished in Neo-classical style with sculptures of Mercury and Poseidon added – the former being the Roman god of trade and the latter the god of the sea – to enhance Dutch prowess at both trade and sailing. The beautiful front door was created by a slave carpenter, Rangton van Bali, whose excellent work later earned him his freedom.

In 1824 a lovely ballroom was added, but the building was damp and no longer habitable except during the driest months of the year. At the beginning of the 20th century the town council considered demolishing it, but as the house was linked to the city’s history, they couldn’t decide whether to knock it down or not.

In 1968 it was decided to restore the house and Gabriel Fagan was commissioned to carry out the necessary repairs. Using drawings that dated back to 1790, he began the work and during restoration, he uncovered the façade’s original stucco garlands, bas reliefs and floral decorations that you can photograph today.
Image Courtesy of Wikimedia and Raymond Ellis.
6

The Bertram House stands at the corner of Orange Street and Government Avenue Gardens.

Due to the strong Dutch influence in Cape Town, it is easy to forget that the British held the area several times during South Africa’s history, and Bertram House is a house museum which will show you how a wealthy British family lived in a country far from their own.

You should perhaps note that at the time of the British rule in the region, the settlers were, on the most part, military, trading or mining families who came from the British working or middle classes. Compared to the locals, these families were the nouveau riche and some of them modeled their homes on the grand houses they had dreamed about owning.

Bertram House was built in the Georgian style and is one of the last surviving buildings of its kind in the Cape area. It was built in 1839 by John Baker and its British owners lived there until 1903. When they left the country, it was bought by the South African College and taken over by the government in 1930.

The house was saved from demolition by the determination of Winifred Ann Lidderdale, a member of the South African Cultural History Museum, who insisted that it should be made into a house museum.

Restored to its former beauty, the house museum is furnished with English Georgian furniture and beautifully decorated in light colors. The 364 pieces of Chinese and English porcelain are from the personal collection of Mrs. Lidderdale.