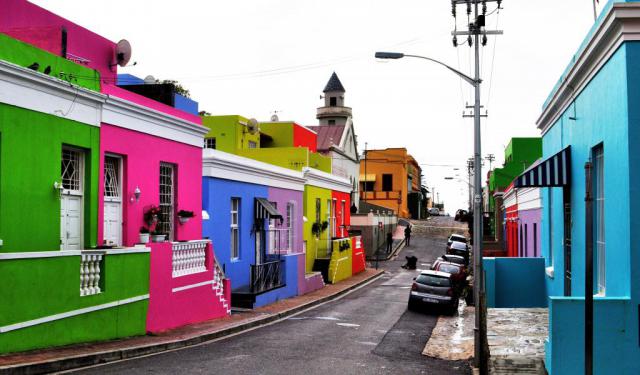 Image by Stephanjvv on Wikimedia under Creative Commons License.

Slaves came from Malaysia, Indonesia, and other parts of Africa. Many of these slaves were Muslim, and this area celebrates Islamic culture and history. Muslims continued to arrive and built Cape Dutch and Cape Georgian-style homes.

Today, the Bo-Kaap District is treasured for its multicultural community, cobblestone streets, and distinctive architecture. You can't miss the Boorhaanol Islam Mosque, which was built in 1884 and features Cape Town's first minaret. As you stroll up Wale Street, the colorful architecture and small boutique shops are sure to catch your eye. Visitors can find unique beaded works of art at Monkeybiz, a craft store with a mission of empowering local women.

Treat yourself at Marco's African Place; it's the perfect place to enjoy a traditional African meal and some local entertainment. Take this self-guided tour for a walk down the cobblestone streets of the Bo-Kapp District and experience the unique Cape Malay culture in this beautiful part of Cape Town.
How it works: Download the app "GPSmyCity: Walks in 1K+ Cities" from iTunes App Store or Google Play to your mobile phone or tablet. The app turns your mobile device into a personal tour guide and its built-in GPS navigation functions guide you from one tour stop to next. The app works offline, so no data plan is needed when traveling abroad.

The Bo-Kaap Museum's building dates back to the 1760s. It's the oldest unchanged house in the area. The Bo-Kapp Museum celebrates the Cape Muslims' culture, which prospered in this area after the abolition of slavery in the 1834. The museum was founded in 1978.

The museum is furnished as a typical 19th-century Muslim dwelling and celebrates Islamic culture. The "Cape Malays" were known as skilled artists, carpenters, and scholars. The old Cape Dutch feel is accentuated by yellowwood floors and ceilings. The teak door frames, window frames, and shutters are representative of the traditional local style.

One of the rooms is beautifully decorated as a bridal chamber and features a bridal dress. Visitors will also find examples of Quranic calligraphy, historic photographs, and Islamic art.

Another exhibit is dedicated to the convicts, slaves, and free workers who built Cape Town over three centuries. This exhibit focuses on pre-apartheid racial discrimination.

Image by David Stanley on Flickr under Creative Commons License.
2

Located next door to the Bo-Kaap Museum, the Monkeybiz boutique sells unique beaded dolls and animals of all sizes. However, this is not simply a quaint toy store. It's a non-profit organization that gives work to over 320 local beaders. These local women are trained in beadwork, given materials, and then can work from home. Their work enables them to provide for their families, and working from home allows the artists to save on transport costs and childcare.

Monkeybiz aims to be environmentally friendly, too. They use discarded cutoffs from local clothing manufacturers to create filling for the dolls and animals.
Image by South African Tourism on Flickr under Creative Commons License.
3

The Auwal Mosque, alternatively spelled Awwal, Owal or Owwal, is a mosque in the Bo-Kaap neighbourhood of Cape Town, recognised as the first mosque established in the country. It was constructed in 1794 during the first British occupation of the Cape on land belonging to Coridon van Ceylon, a Vryezwarten (freed Black Muslim slave). Coridon's daughter, Saartjie van de Kaap, inherited the property that was being used as a warehouse, and donated it for the use as South Africa's first mosque.

The mosque was constructed in 1794 with renovations done in 1907 and extensive renovations done in 1936. It is the first mosque to observe public prayers and is where Cape Muslim traditions and the Arabic-Afrikaans language were first taught. It remains a symbol for Muslims of the recognition of Islam and the freedom of slaves to worship.

Qadi Abdussalam, affectionately known as Tuan Guru, was appointed the first imam. Tuan Guru was a religious leader and political prisoner. While in prison, he wrote the entire Quran from memory. This Quran is on display at the Auwal Mosque. Tuan Guru also used the mosque as a madrassah, or "religious" school, where he instructed both children and adults in matters of Islam.

After Guru's death, Saartjie van de Kaap's husband, Achmad of Bengal, assumed the position of imam. This position was to be held by members of his family until the last imam from this family, Gasan Achmat, died in 1980. The position has since been filled by many imams, including the likes of Sheikh Salih Abadi. Currently, Moulana Mugammad Carr and Sheikh Ismail Londt are joint imams.

Due to a dispute as to who was to be the next imam of the congregation, a portion of the Auwal congregation split off in 1807 and formed Cape Town's second mosque, the Palm Tree Mosque on Long Street.
Image by LiebeB on Wikimedia under Creative Commons License.
Sight description based on wikipedia
4

Wale Street transverses the heart of the Bo-Kaap District. Here, you will find colorful houses and traditional cobbled streets. Some of the houses date back to 1763-1768. In the 18th and 19th centuries, the Dutch captured slaves from Indonesia, Zanzibar, Mozambique, and Madagascar. These slaves leased homes in the Bo-Kaap district. According to folklore, when the houses were leased, they had to be painted white. After the slaves were granted freedom and allowed to buy houses, the former slaves painted the homes in vibrant colors.

The Bo-Kaap area is steeped in Malaysian culture. Many descendants live in the Bo-Kaap area and keep the "Cape Malay" traditions alive. Cape Minstrel Carnival is held every January 2nd and is a must-see if you are in the area.

While walking on Wale Street, keep an eye out for Islamic shrines, known as "kramats." You'll also see mosques, food markets, and craft markets in the area.

Biesmiellah Restaurant serves traditional Cape Malay food. Both indoor and rooftop seating is available. Visitors that choose the rooftop are treated to views of Bo-Kaap and Table Mountain. Diners should note that alcohol is not served at this traditional Muslim restaurant and is not permitted on the premises.

The restaurant looks unassuming from the outside. Inside, it's very welcoming. Islamic art hangs on the walls, and wood paneling adds to the cozy decor.

The food is quite spicy. Bobotie is one of the most popular menu items. Bobotie is made with beef, curry spices, raisins, and an egg topping. The flavors are intoxicating and very unique. The Pienang curry is a delicious Cape Malay sweet and sour curry. Denningvleis is another unique Cape Malay dish that is sure to delight.

The Boorhaanol Islam Mosque was built in 1884. It was originally known as Pilgrim Mosque and featured the first minaret in Cape Town. The minaret features a tower with a balcony. The balcony is used to call the faithful to prayer five times a day. The tall, distinctive minaret also serves as a visual reminder to the Muslim community.

The Boorhaanol Islam Mosque's original minaret was made from wood and blew down in a storm in the 1930s. The current minaret is made from concrete.

Boorhaanol Islam Mosque is the only mosque in Cape Town that has been declared a National Monument. In keeping with the rest of the Bo-Kaap district, it is painted in bright seafoam green with eye-catching white trim.

The Dutch and British occupiers were often hostile to the practice of the Muslim faith. Throughout much of the 20th century, the Muslim community was burdened by racist attitudes and laws. Since 1994, all religions are permitted to practice freely.

Besides providing a spiritual center to the Cape Malay Muslim community, the Boorhaanol Islam Mosque provides community services and programs.
Image by Robert Cutts on Flickr under Creative Commons License.
7

The proprietor and chef, Marco, was the first black restauranter in Cape Town. He opened his first restaurant in 1989. Marco's African Place opened in 1997.

Here, you can have unique African dishes you can't get anywhere else. Crocodile and impala are popular choices. Diners can also try traditional Xhosa Dishes. For a tour of African specialties, try the Pan African Platter with Springbok, Kudu, and Ostrich.

To complete the exquisite meal, pair with a home-brewed African beer. Marco's also offers a full bar with an extensive wine, liquor, and cocktail menu.

Save room for a dessert; a delightful selection of sweet temptations is offered.
Image by JulieScheer on Wikimedia under Creative Commons License.