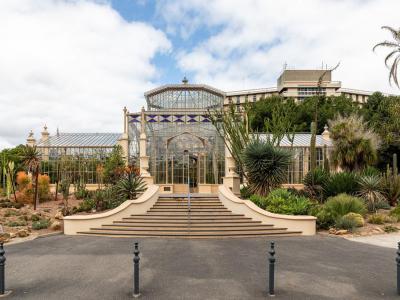 Stretching on 51 ha (125 acres), the Adelaide Botanic Garden is a public garden situated at the north-east corner of the Adelaide city center, in Adelaide Park Lands. It encompasses a fenced garden on North Terrace and behind it the Botanic Park. The Adelaide Botanic Garden, together with the Wittunga and the Mt Lofty Botanic Gardens, comprise the three Botanic Gardens of Adelaide. The Botanic Garden features an exotic Palm House, a majestic Rose Garden and a Bicentennial conservatory. Amongst other scientific and educational displays of native and international horticulture, the gardens hold one of the earliest propagated specimens of the Wollemi Pine tree, which was discovered as recently as 1994.
Image by Peripitus on Wikimedia under Creative Commons License.
Sight description based on wikipedia