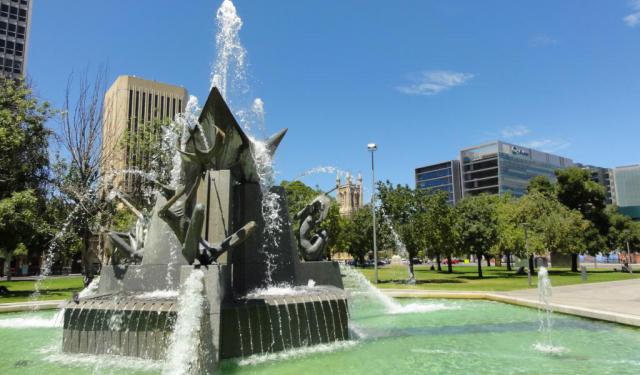 Image by eGuide Travel on Flickr under Creative Commons License.

Adelaide is a beautiful city adorned with important monuments, statues, towers and squares. This tour will guide you to the most significant landmarks, which much loved by the Australian people and popular with tourists. Many of the monuments were built in the 19th century, but have been kept in very good condition.
How it works: Download the app "GPSmyCity: Walks in 1K+ Cities" from iTunes App Store or Google Play to your mobile phone or tablet. The app turns your mobile device into a personal tour guide and its built-in GPS navigation functions guide you from one tour stop to next. The app works offline, so no data plan is needed when traveling abroad.

Victoria Square is the central square of Adelaide's five public squares. Also known as Tarntanyangga, the 5.9-acre square was created in 1837 by Adelaide founder, Colonel William Light. It was named by the Street Naming Committee after Princess Victoria. The name Tarntanyangga comes from the aboriginal language of Kaurna. It means "red kangaroo."

The square was originally a simple field with four pedestrian paths. Landscaping was added in the mid-19th century, but it remained mostly unchanged until 1894. At this time, a statue of Queen Victoria was added - the princess had become queen by now. Eventually, a statue of Colonel Light, the Three Rivers Fountain and the Aboriginal Flag were all added.

Victoria Square is surrounded by many of Adelaide's most important public buildings. Some of these include the Supreme Court of South Australia, the Federal Court of South Australia and the Adelaide Magistrates' Court. Historic buildings like the former post office, the Roman Catholic Cathedral Church of St. Francis Xavier and the historic treasury building are also nearby.

One of the most popular traditions in Victoria Square is the installation of an 80-foot Christmas tree each holiday season. It is also a regular spot for political gatherings and community events.

Image by Amanda Slater on Flickr under Creative Commons License.
2

The monument dedicated to Great Britain’s Queen Victoria is located in the center of Victoria Square. Considered one of the greatest historical figures, the period during her reign was one of progress and expansion.
Image by amandabhslater on Flickr under Creative Commons License.
3

The statue of explorer Captain Charles Napier Sturt (1795–1869) was described as ‘the most alive’ statue in Adelaide when it was unveiled in December 1916. It stands in marked contrast to the staid monuments to Queen Victoria, Charles Cameron Kingston and John McDouall Stuart that also occupy Victoria Square, Adelaide.

The life-size bronze statue of Sturt is dressed not in finery, but in the working clothes of an outback explorer. He wears working pants and worn knee boots. The sleeves of his open-necked shirt are rolled up to the elbow and his head is protected by a broad brimmed hat. Sturt leans forward, shielding his eyes from the sun with a raised right hand as he peers into the distance. He carries his tools of trade: a compass on his belt, a telescope and crumpled map in his left hand, and a water bottle slung over his shoulder.
***PH***
Image by denisbin on Flickr under Creative Commons License.
4

The statue commemorates explorer John McDouall Stuart (1815 – 1866), a Scottish explorer and one of the most accomplished and famous of all Australia's inland explorers. A plaque on the statue lists the members of his expedition.

At the end of 1860 the South Australian government voted £2500 to equip a large expedition to be led by Stuart. Burke and Wills had already set out to cross the continent so there was no time to lose if a South Australian party was to arrive first.

On 1 January 1861 he left Chambers Creek with eleven men and reached Attack Creek late in April; with two others he discovered a way through the scrub that had defeated him before, and found Sturt`s Plain. After exhausting failures to pass the plains, with their provisions low and their clothes in shreds, Stuart gave in and on 12 July turned south to reach Adelaide on 23 September. He received the 1861 gold medal of the Royal Geographical Society from the Governor.

The explorations of Stuart eventually resulted in the Australian Overland Telegraph Line being built and the main route from Port Augusta to Darwin being established, which is now known as the Stuart Highway in his honour.

The ceremony of unveiling the statue of John McDouall Stuart was the first of a series of celebrations the objective of which was to write the history of South Australia in stone. Moreover, the South Australian public contributed generously to the statue fund, which was also liberally subsidised by the State.
***PH***
Image by YellowMonkey on Wikimedia under Creative Commons License.
5

There are several items of modern sculpture in the Rundle Mall. The best-known is the 4-metre (13 ft) tall The Spheres by Bert Flugelman; two large stainless steel spheres with a diameter of 2.15 metres (7 ft 1 in) balanced one on top of the other (commonly referred to as the "Mall's Balls" or "Rundle Mall balls"), and is a common meeting place for visitors to the mall. Erected in 1977, they were commissioned by the then Hindmarsh Building Society (subsequently absorbed into the Adelaide Bank) and donated to the City of Adelaide to mark the building society's 1977 centenary.
Image by Danijel-James Wynyard on Flickr under Creative Commons License.
Sight description based on wikipedia
6

If you visit Rundle Mall you will meet several items of modern sculpture. One of them includes a group of life-size bronze pigs - Horatio, Truffles, Augusta and Oliver- fooling and rooting around a rubbish bin. Because it is an unusual city adornment, it has become quite popular.
Image by Ferenghi on Wikimedia under Creative Commons License.
Sight description based on wikipedia
7

The National War Memorial is a monument commemorating those who served in the First World War. Opened in 1931, the memorial is located in the heart of the central business district. The memorial was funded by the Parliament of South Australia, making it the first Australian state war memorial to be confirmed after the war.

The National War Memorial in South Australia became the fourth state World War I memorial to be opened when it was unveiled in 1931. Although the National War Memorial was initially proposed as a memorial to those who served in "The Great War", the site has since grown to incorporate a number of smaller memorials. The monument has two sides, referred to by the architects as the reverse and the obverse of the work; these two aspects represent the prologue and the epilogue of war.
Image by denisbin on Flickr under Creative Commons License.
Sight description based on wikipedia
8

The Boer War Memorial (also known as the South African War Memorial or, prior to 1931, the National War Memorial) is an equestrian memorial dedicated to victims of the Second Boer War, from 1899 to 1902. It was constructed with a budget of £2500 raised through public donations, and was designed by the London-based sculptor Adrian Jones. On each side of the 12 foot granite pedestal is a bronze plaque on which the names of 59 South Australians who died in the war are inscribed. While the statue itself was not intended to represent any particular soldier, there is evidence suggesting that the head of the rider was based on that of George Henry Goodall. The statue was unveiled by the Governor of South Australia, George Le Hunte, on 6 June 1904. Standing in front of the Adelaide Government House, it has since become one of the focal points for the Anzac day marches, as well as being regarded as one of the most "eye-catching" and significant statues in the city. As such, it was added to the national heritage listing in 1990.
Image by Rabogna on Wikimedia under Creative Commons License.
Sight description based on wikipedia
9

The Elder Park Rotunda was officially opened on November 28, 1882, with 2,000 guests taking part in the ceremony. A special song, composed for the occasion, called The Rotunda March was performed. It has a splendid panoramic view of Torrens Lake with a fountain and special lighting display. The Rotunda has been the venue of Saturday concerts for many years.
Image by Peripitus on Wikimedia under Creative Commons License.
10

The Don Bradman Statue, standing in front of Adelaide Oval, became famous in 1930 after a record-breaking performance. Since than he has been an icon of Australian cricket, with a reputation that grew beyond the sport. As a tribute, the Australian Commonwealth Treasury issued coins with Bradman's image.
Image by Budgiekiller on Wikimedia under Creative Commons License.
11

The first surveyor-general of Adelaide, South Australia, Colonel William Light designed a layout and development programme for the city. This plan is now known as "Light's Vision". Notable aspects of Light's plan are that the city center is laid out in a grid-like pattern, with squares in the center of the city and in the centers of the four quarters of the city, and the city is surrounded by Parklands. Light's work was acknowledged by the "Light's Vision commemoration" statue, by Glaswegian sculptor Birnie Rhind, which was unveiled in the northwest of Victoria Square in 1906, but was moved from Victoria Square to Montefiore Hill in 1938. Since then, the statue has depicted Light pointing at the City of Adelaide below. His body is buried under the statue bearing his name in Light Square.

Legend has it that William Light stood on Montefiore Hill in 1837, pointed at what would one day become the Adelaide city center, and said "This is the place for a city".
Image by Orderinchaos on Wikimedia under Creative Commons License.
Sight description based on wikipedia