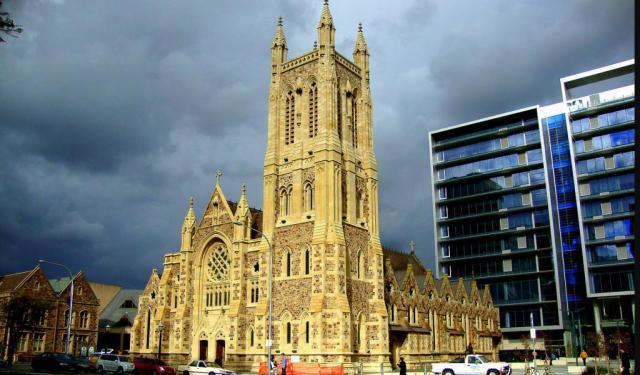 Australia houses several religious buildings, including Christian, Catholic, Anglican, Uniting and Islamic. Many are part of South Australia's heritage and some date back to the 19th century. Take this self-guided walking tour to discover Adelaide’s holy buildings.
Image Courtesy of Wikimedia and Honeykanakkary.
How it works: Download the app "GPSmyCity: Walks in 1K+ Cities" from iTunes App Store or Google Play to your mobile phone or tablet. The app turns your mobile device into a personal tour guide and its built-in GPS navigation functions guide you from one tour stop to next. The app works offline, so no data plan is needed when traveling abroad.

Catholicism was brought to Adelaide for the first time in 1841 by a group of immigrants. Within a year, Rome created the Diocese of Adelaide and the first Catholic church was built in 1845. The present Adelaide Archdiocese, covering 105,000 square kilometers, is presided over by Archbishop Philip Wilson. St. Mary's Church is a recent construction, but a very beautiful one, made of red brick and stone and frequently hosts weddings and other religious ceremonies.
Image Courtesy of Flickr and Paul Weston.
2

Formerly the North Adelaide Congregational Church, Brougham Place Uniting Church is a landmark looking over the Brougham Gardens in the Adelaide Parklands. Thomas Frost is attributed as the architect of the church and the foundation stone was laid on 15 May 1860. A tower was added in 1871 and a lecture hall in 1878. The church's pipe organ was built in 1881 at which time it was "the largest two manual organ in the colony".
Image Courtesy of Wikimedia and Alex Sims.
Sight description based on Wikipedia.
3

St Peter's Cathedral is an Anglican Cathedral in the South Australian capital of Adelaide and the seat of the Bishop of the Anglican Diocese of Adelaide. The cathedral is situated on approximately one acre of land and its south face has similar features to the Cathedral of Notre Dame in Paris, including an ornate rose window above the main entrance which depicts stories of South Australia and the Bible.

The cathedral's interior is 203 feet (62 m) long of which the Lady Chapel occupies 30 feet (9 m) and the nave and chancel the remainder. The nave is 59 feet (18 m) wide and, at the top of the spire's crosses, the cathedral rises 168 feet (51.2 m) from ground level. In the western tower is the cathedral's ring of eight bells. With the tenor bell weighing over 40 long hundredweights they are the heaviest ring of bells in the Southern Hemisphere, and the second heaviest ring of eight in the world.

Image Courtesy of Flickr and eGuide Travel.
Sight description based on Wikipedia.
4

Governor Hindmarsh laid the foundation stone on 28 January 1838 and the church opened in about August that year. The building quickly became a landmark with its ‘peaked cap’ top tower and the Vulliamy clock . Trinity is part of the Adelaide Diocese and has an increasing number of locally trained staff, particularly trainees through the Ministry Training Strategy and students of the Bible College of South Australia.

Image Courtesy of Wikimedia and Orderinchaos.
Sight description based on Wikipedia.
5

St. Francis Xavier's Cathedral is a Roman Catholic cathedral. Construction of the building began in 1856. It was consecrated two years later, but it was not fully completed until 1996. The Early English, Gothic Revival style cathedral has had a series of architects over the years. These include original architect Richard Lambeth, followed by Charles Hansom, Peter Paul Pugin and finally Lynton Jury.

The last component of the cathedral was the bell tower. Though construction of the tower started in the 1800s, it took 109 years for it to reach its final height. The main bell is the Murphy Bell of 1867, which is surrounded by 13 bells. Seven of the 13 accompanying bells once hung in Sydney's St. Mary's Cathedral.

Those visiting St. Francis Xavier's Cathedral should note some of the church's special features. These include bronze statues of Joseph and Jesus, a statue of St. Patrick and a statue of St. John the Baptist, which was created in Tuscany in 1925. The cathedral also features stained glass lancet windows with images of St. Patrick, St. Lawrence, Mary and Jesus.

The cathedral has a daily mass at 5:45 PM. It is open throughout the day for those who would like to visit.

Islam has been accepted in Australia since 1860. Built in 1888, the Central Islamic Mosque is the oldest mosque in Adelaide. It has four minarets from 1903, which have been rebuilt since then. Part of Australian heritage, this building is protected by the government.
Image Courtesy of Flickr and Hazel Motes.
7

St. Nicholas Church, located in the southern part of Adelaide, is one of the few Russian Orthodox churches in the city. Built in the mid-20th century, it has unforgettable Russian architecture, with a white exterior symbolizing purity. This church often hosts traditional wedding ceremonies.
Image Courtesy of Wikimedia and Don Nairn.