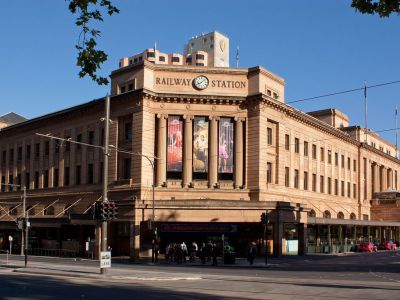 Adelaide Railway Station is the central terminus of the Adelaide Metro railway system. Adelaide’s first railway station opened on the current North Terrace site in 1856. It served the broad gauge line between Adelaide and Port Adelaide, which was the first government-owned and operated steam railway in the British Empire. The period from 1922 onwards was known as the Webb era on South Australian Railways. Under the leadership of a new Railways Commissioner, William A. Webb, South Australian Railways began a massive rehabilitation programme. However the years 1985 to 1987 saw the biggest change at Adelaide Station since the rebuilding of the 1920s, under the ASER project. The station has nine platforms and almost all trains on the metropolitan network either depart from or terminate here. Today 40,000 people pass through Adelaide Railway Station each weekday.
Image by Rexness on Flickr under Creative Commons License.
Sight description based on wikipedia