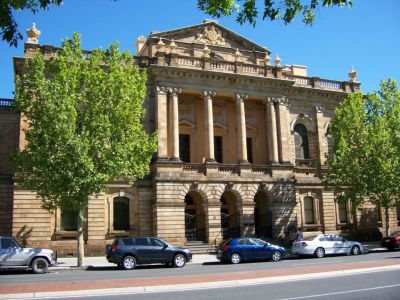 The creation of South Australia’s Supreme Court was an early example of Edward Wakefield's theory of colonization, in contrast to the other Australian colonies, which had established their courts long after the settlement of the colony. Established by Letters Patent in 1837, five days after the colony was founded, unlike other Supreme Courts it is not divided into separate trial and appeal divisions. It has unlimited jurisdiction within the state in civil matters, and hears the most serious criminal matters. The Supreme Court is the highest South Australian court in the Australian court hierarchy. It is constituted of a Chief Justice and 12 other judges (justices).
Image by Scott W. on Wikimedia under Creative Commons License.
Sight description based on wikipedia

This sight is featured in a self-guided walking tour of Adelaide, Australia within the mobile app "GPSmyCity: Walks in 1K+ Cities" which can be downloaded from iTunes App Store or Google Play. Please download the app to your mobile phone or tablet for travel directions for visiting this sight. The app turns your mobile device to a personal tour guide and it works offline, so no data plan is needed when traveling abroad.