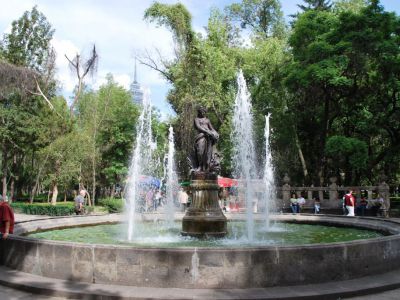 Just west of Palacio de Bellas Artes, the Alameda Central is the largest green oasis in the center of the city and the oldest public park in the Americas. Today, it is a tree-filled respite from the bustle of the Centro Histórico – despite being flanked by major avenues on all sides and serviced by two Metro stations and a Metrobús stop.

The original Alameda, inaugurated in the 16th century was filled with poplars, or "alamos" – hence, the park's name. Throughout the centuries, it evolved from an exclusive strolling park to a bustling family-oriented destination. The Alameda's popular spirit was celebrated by Diego Rivera in his famous work "Sundays on the Alameda Central", located in the Museo Mural Diego Rivera on the park's west end. Most prominent among the many fountains and neoclassical statues throughout is the "Hemiciclo de Benito Juárez", a semicircle of 8 marble columns, facing Avenida Juárez on the south.
Image by Thelmadatter on Wikimedia under Creative Commons License.