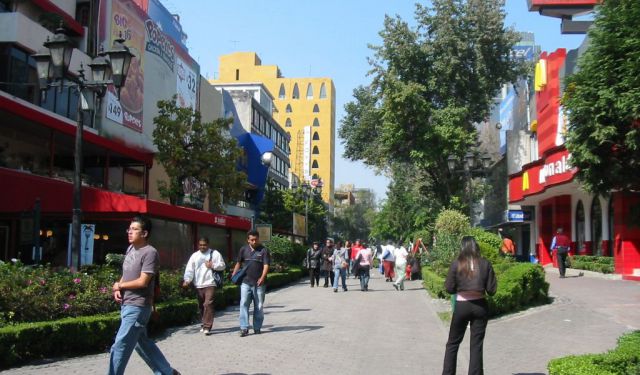 Zona Rosa, or the Pink Zone, is one of Mexico City's popular neighborhoods. It is located near the historic center of the city, and was called Pink Zone because of the pink tiles that are prevalent here. The area is noted particularly for its splendid Beaux-Art architecture, the city's best handicraft markets and antique shops. Take this self guided tour to discover the beauties that Zona Rosa has to offer!
Image Courtesy of Wikimedia and Thelmadatter.
How it works: Download the app "GPSmyCity: Walks in 1K+ Cities" from iTunes App Store or Google Play to your mobile phone or tablet. The app turns your mobile device into a personal tour guide and its built-in GPS navigation functions guide you from one tour stop to next. The app works offline, so no data plan is needed when traveling abroad.

The fountain of Diana stands on a roundabout near the Paseo de Reforma in Mexico City. The statue of Diana the Huntress is depicted by the sculptor as aiming her bow and shooting the arrow to the skies.

In 1942, architect Vincente Mendiola and Sculptor Juan Olaguibel were commissioned to build a fountain in a roundabout near the entrance of Chapultepec Park on the Reforma Avenue. The commission was the result of a beautification drive of Mexico City by the then President, Manuel Avila Camacho. A 16 year old secretary, Helvia Martinez was chosen as a model for the fountain. She posed for the sculptor for free knowing that her body would be immortalized in a landmark of Mexico City. On October 10th 1942, the statue was inaugurated. Some sections of the population appreciated the sculpture while ultra conservative sections of society called the Decency League protested against the nude depiction of Diana and forced the artist to put underwear on the statue. Before the 1968 Olympics, it was decided to remove the underwear but the attempt damaged the statue. The statue was removed to Ixmiquilpan, the home town of Juan Olaguibel. By popular demand by artists and citizens, the statue was restored in 1992.

The roundabout at the entrance to Chapultepec Park is decorated by a beautiful fountain and a sculpture that remains a fitting tribute to artistic freedom that survives despite setbacks.

Image Courtesy of Wikimedia and * CliNKer *.
2

Modeled after the Champs-Élysées in Paris, the Paseo de la Reforma is the main road in Mexico City that runs through the Historic district as well as Embassies and upscale residential buildings. The Paseo de la Reforma was formerly the Paseo de la Emperatriz or the road of the Empress. It was commissioned by Emperor Maximilian I of Mexico to link his residence at the Chapultepec Castle to the National Palace that flanks the Zocalo. During the reformist reign of President Benito Juarez, the avenue became the Paseo de la Reforma. It was designed in 1860 by Ferdinand Von Rosenzweig.

The Paseo de la Reforma is 15 kilometers long and 60 meters wide. The road has 6 to 8 lanes and a green strip at the center with a unique design. There is a monument at most of the large roundabouts located at the intersections. Busts of famous personalities who shaped the history of Mexico flank the avenue.

Today, major office blocks, museums, monuments, hotels and cinemas are located on the Paseo de la Reforma. The avenue is also the location of the embassies of the United States, the European Union, and the Mexican Stock Exchange.

Tip:
On Sundays, the avenue closes down to cars so that multitudes of people can ride bikes, walk, jog, rollerblade or stroll down the street from the park all the way up to the historic center.
You can pay for bike rental or get one for free (first come, first served) if you bring your ID/passport and arrive early.

Image Courtesy of Flickr and Mr.PMCP.
Sight description based on Wikipedia.
3

The focal point for both celebrations and protests, the Angel of Independence serves as a monument of the 100th year of Mexican Independence and as a memorial for its heroes. The statue is located in a roundabout over the Paseo Reforma in Mexico City. The official name of the statue is the Columna de la Independencia.

President Porfirio Diaz commissioned the sculpture in 1902. Italian sculptor Aciati made the figures that adorned the structure and architect Antonio Rivas Mercado designed the monument. The first purpose of the Angel was to commemorate the 100th year of Mexico's Independence. In 1925, the monument was also made a mausoleum for heroes. Miguel Hidalgo, the father of the nation, Juan Aldama and Nicolas Bravo are interred beneath the foundations. The angel fell from the pillar in the earthquake of 1957 but was restored to its former glory by sculptor Jose Fernandez Urbina. An eternal flame to honor the interred heroes was added in 1929.

The column is made of steel surrounded by quarried stone. The 36-meter high column is covered with carved garlands, palms and rings. The carved figures contain names of the important personalities who helped to shape Mexico's independence. The angel on top is 6.7 meters high and is made of bronze coated with 24-carat gold. A hidden staircase within the column takes visitors to the Corinthian style Capital and the angel is lit beautifully for the benefit of those who drive by at night.

Tip:
Tours to the Angel normally include only a walk around inside the statue's base and its mini-museum; however, with advance notice and a special permit, groups can ascend the statue's inner staircase and go all the way to the top for a glimpse at the city below – a breathtaking site!
Image Courtesy of Flickr and Matthew Rutledge.
Sight description based on Wikipedia.
4

Located in one of the many rotundas intersecting the Paseo de la Reforma in Mexico City, is a statue dedicated to Christopher Columbus and the Christianization of the Americas.

The plan for installing a statue in honor of Christopher Columbus was conceived during the rule of Emperor Maximilian I. The emperor’s father in law King Leopold I of Belgium expressed his desire to donate a statue of Columbus commemorating the discovery of America. At the time, the Emperor commissioned the architect Ramon Rodriguez Aragoity to design the monument and sculptor Manuel Vilar was to fabricate the figures that would adorn the edifice. The statue was not erected because the Emperor was deposed and executed during the reign of the liberals in Mexico. Later, Antonio Escandon, a loyalist of the emperor and the pioneer of railways in Mexico commissioned a sculpture of Christopher Columbus while in exile in Paris. The sculptor to whom the work was entrusted was Frenchman Henri Joseph Cardier. Escandon later donated the sculpture to Mexico City and it was erected at the location originally planned by Emperor Maximilian.

The statue is placed on a pink pedestal with renaissance art and two stone carvings called the Landing of Christopher Columbus and the Founding of the Church. Four other sculptures are those of the first catholic missionaries who began the task of conversion of the native people of the Americas.
Image Courtesy of Flickr and Hessee.
5

La Ciudadela is a Mexico City experience: an exposure to its color, the variety of its crafts and the charm of its people. Go even if just to browse a bit; you will likely come away with a woven wallet, table runner or purse, small pottery boxes for friends or a serving piece for your table, toys for the children in your life, or one of the many other offerings. Prices are good, but it it best to start with "Cuánto cuesta?" (Spanish for "How much?") and it helps to know a few numbers so that you can bargain (which most vendors will) a price. If you can not master the numbers, take a small pad, point to it when you ask "Cuánto cuesta?" and then write your offer and haggle that way (but remember that many of the items are not that expensive to begin with). Fairness gets you a long way.

The market is made up of many different stalls, so if you have time, be sure to work your way to the center, comparing prices and quality, before you buy. Also, many of the vendors selling smaller items only take cash while others accept credit cards as well (though, in case of the latter, there will be far less negotiating on price).

The San Juan market features many original and traditional handicrafts like pottery, fabric, pewter, wood, silver, precious and semi-precious stones, and leather. There are also t-shirts, masks, table cloth, traditional bags, etc. The market has over 100 stores that focus on Mexican hand-made crafts and souvenirs, stocking everything you can image. Vendors are polite and friendly, and the price listed is always a starting point, meaning you can get some great deals.

Mexico City is both the oldest capital in the Americas and one of the two founded by indigenous people. Originally known as Mexico Tenochtitlan, it was built by the Mexica (Azteca) people in 1325. According to legend, the Mexicas' principal god, Huitzilopochtli, indicated the site for the future settlement by presenting a golden eagle perched on a prickly pear devouring a rattlesnake.