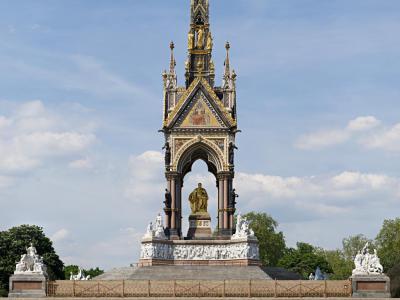 The Albert Memorial stands in Kensington Gardens directly adjacent to the Royal Albert Hall. This memorial was commissioned by Queen Victoria to honor the memory of her husband, Prince Albert of Saxe-Coburg and Gotha.

The memorial is 176 feet high. It features a statue of Prince Albert enclosed in a Gothic-style ciborium. It is surrounded by a 210 foot long frieze titled "Frieze of Parnassus." This highly-detailed work shows 169 figures of famous, historical artists and composers. Some of those depicted include Moliere, Pythagoras, Mozart, Rembrandt and Michelangelo.

A series of sculptures surround the memorial. These sculptures represent traditional arts and sciences as well as four continents. They are titled, "Agriculture," "Commerce," "Engineering," "Manufacturers," "Africa," "America," "Asia" and "Europe."

Visitors to Kensington Park can see the Albert Memorial at any time during the park's opening hours of 6 AM through 5:45 PM. Those who want a closer view of the frieze can attend a free tour of the statue on Sundays.
Image Courtesy of Wikimedia and Diliff.