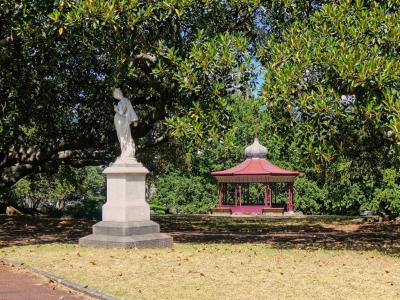 Albert Park is one of the many beautiful parks that have been set out in Auckland. The tranquil outdoors space is a labyrinth of walking paths leading up to well-tended garden beds and memorials or public artworks. The park was built upon the site of the Albert Barracks in the 1880s, but before European settlement, the park had been where a Maori settlement lay. Around the park, there are many interesting sites including Albert Park House and the Auckland Art Gallery. One of the most popular features of the park is the Victorian fountain, which is one of the oldest fixtures.

There is also a large statue of Queen Victoria, which was made to celebrate the monarch’s 60th jubilee in 1899. There are war memorials including one for the troops who fought in the Boer War of the late 19th century. There is also a floral clock, which was donated to celebrate Queen Elizabeth II’s visit to the country in 1953. Underneath the ground, the earth is hollowed out like Swiss cheese from the many intersecting tunnels that were built by US troops during World War II – these are now boarded up and cannot be entered. Albert Park is a great place to wander on a fine Auckland day to find relaxation as well as see some of the park’s outdoor features.

Why You Should Visit:
If you're wanting a nice secluded takeaway lunch in the central business district, this is the spot.

Tip:
There's a road splitting the park into two sections. One is on a steep slope with large trees dotted around – you can see the CBD here. The southern side continues up the slope before flattening out at the top where you'll see statues and flowers.