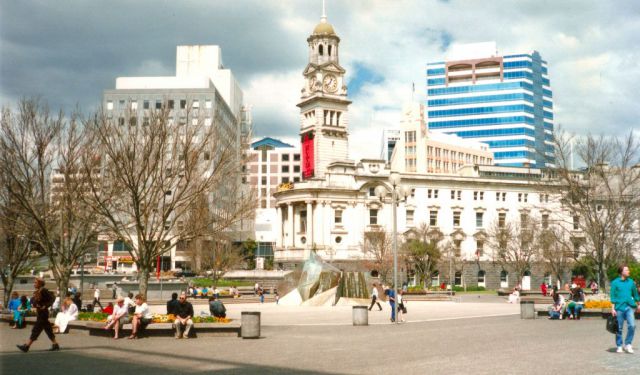 Auckland may not be known as a historical city, but it does have many historical buildings, some dating back to the 19th century. These old buildings, with beautiful architecture and original furnishings, keep the glorious past of the city alive and are considered as landmarks. This self-guided tour takes you to see some of the most important historical buildings in Auckland.
Image Courtesy of Wikimedia and Sandy Austin.
How it works: Download the app "GPSmyCity: Walks in 1K+ Cities" from iTunes App Store or Google Play to your mobile phone or tablet. The app turns your mobile device into a personal tour guide and its built-in GPS navigation functions guide you from one tour stop to next. The app works offline, so no data plan is needed when traveling abroad.

The Auckland Ferry Terminal or simply Ferry Building is one of Auckland’s landmark buildings located right in the city’s downtown area. The site known as the Ferry Building is actually comprised of two parts known as the Old and New Buildings. The Old Building is constructed of sandstone in the Edwardian Baroque style and was completed in 1912. The impressive nature of the building demonstrates the importance of water transport in Auckland at the beginning of the 20th century. Originally the building was put to use as a terminal as well as space for the trade unions and consulate offices as well as those of the ferry companies, but in the 1980s it was refurbished and turned into retail space.

In recognition of the importance that the building holds in the growth, development and history of Auckland, it is now registered with the Historic Places Trust. Most of the actual ferry operations have now been moved to the New Building, which has modern piers and appropriate space for the current ferries in use today. The New Building was designed to appear as ships that are anchored behind the original Ferry Building. Auckland is one of the world’s great harbour cities and a stroll through the Ferry Building and a trip out onto the water are a must.

Tip:
Whether or not you're taking a cruise from Auckland, give yourself time to walk around and in this building.
Also, take the time to get yourself a very tasty gelato from the store there and enjoy the view at the harbor.
The outdoor seating facing the waterfront tops the experience off. Public restrooms are a few steps away.


Image Courtesy of Wikimedia and Follash.
2

From modest beginnings in 1841 to the grand building you see before you today, St. Patrick’s Cathedral in Auckland has always been the centre of Catholicism in the city. The land that the cathedral is built on was granted by the crown to the city’s first bishop Jean Baptiste Pompallier on June 1st, 1841. A simple wooden structure was first built to serve the 300 odd strong congregation that was mainly made up of Irish immigrants. It was clear that a more substantial building would be required and in 1845 an architect was commissioned to design a stone church. When Auckland was made a diocese in 1848, it was clear that a grander building would be required.

In 1884 the foundation stone was laid for extensive expansions to be made to the church and the old stone church became the transept. A new nave was added that included a bell tower and bells were imported directly from Rome. The new cathedral was officially opened on March 15, 1885 – just before St. Patrick’s Day. Further expansions were carried out to make more space for the growing city’s congregation at the turn of the 20th century and the church that was completed in 1907 is the very same that you gaze upon today.
Image Courtesy of Wikimedia and Krzysztof Golik.
3

The Auckland Town Hall is one of the city’s best loved architectural masterpieces having served Auckland and its residents since it was inaugurated in 1911. The building was designed in an unusual layout in order to fit onto the wedge shaped land that had been put aside for the construction of a town hall. The neo-Baroque building is a five storey building that is constructed out of Omaru limestone and it was totally restored between 1994 and 1997 to ensure that the building continued to best serve the needs of the local population. During the restoration process the original stained glass windows and proscenium arch of the Concert Chamber were discovered and restored to their correct place.

The result of the renovations was a building that has stayed true to its original layout and design – with its kauri floors, ornate plasterwork, delicate stained windows and pressed metal ceiling. At the same time it is now able to offer world class concert halls and performance spaces. The Great Hall is able to seat around 1500 people on three levels and the Concert Chamber has seating for around 430 people on two levels. The pipe organ in the Town Hall is the largest musical instrument in the country.
Image Courtesy of Wikimedia and ChewyPineapple.
4

The Clock Tower at the University of Auckland represents another city landmark and is a symbol of the university. It was built in the middle of 1920s and is also known as the Old Arts Building. This historic building of beautiful architecture symbolizes the success of the university and the city’s past.
Image Courtesy of Wikimedia and Matt Boulton.
5

The Anglican Cathedral of Saint Mary’s in Auckland is thought to be the world’s largest wooden Gothic construction. The foundation stone was laid in 1886 and although the cathedral was originally designed to be built in stone, during the economic downturn of the late 19th century, this was considered to be too expensive. The Gothic Revival building draws upon the finest elements of medieval design and was the final large project for the eminent local architect Benjamin Woolfield Mountfort. The cathedral was consecrated on August 25, 1898 by Bishop Cowie.

The lengthy building has many striking gables and impressive lancet shaped windows, the lack of trusses due to the nature of the building also makes the interior seem open and very spacious. In 1982 an engineering feat was undertaken when the cathedral in its entirety was transported from its original site on a system of rollers across to the new Holy Trinity Cathedral Complex. Today the Anglican Cathedral of Saint Mary’s is located together with the Holy Trinity and the Bishop Monteith Visitor’s Centre. You are free to visit the cathedral from Tuesday to Friday from 10am to 3pm or by prior arrangement, there are also many services held throughout the week.
Image Courtesy of Wikimedia and Gadfium.
6

The Kinder House, located on historic Ayr Street, is one of Auckland’s oldest and most important buildings. The two storey residence was built as the home of Reverend John Kinder, who is today recognized as one of the city’s most important colonial figures. Kinder immigrated to Auckland in 1855 to take up the post of master at the Church of England Grammar School. As well as for his role as a master, Kinder is also noted as one of New Zealand’s most talented and prolific 19th century artists. The house was built for Kinder and his family (his mother and sister) in 1857 under commission by the Anglican Church.

When Kinder married in 1859 his wife, Celia, came to live in this stone home as well. The historic residence where he spent many happy years was also the subject of much of Kinder’s art and photography attempts. Some of his photos have survived 150 years and are important historical documents today. You can also see much of his art work on display on the ground floor of the historic home. Kinder House is managed by the Kinder House Society and is open to the public Wednesday through to Sunday from 12 to 3pm.
Image Courtesy of Flickr and denisbin.
7

One of the highlights of the family’s possessions is the antique book collection with more than 2000 tomes. The cottage offers a snapshot into life in New Zealand during the first days of the colony – you will see much of the home preserved as it was in the 19th century and many cooking, craft and even beauty items and pharmaceuticals. Rooms of the home were used during the filming of the Oscar winning film The Piano. Ewelme Cottage is open from Friday to Sunday, 10am to 4:30pm.
Image Courtesy of Flickr and denisbin.