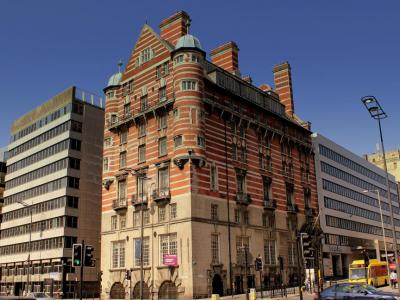 Albion House is situated in Liverpool’s historic docklands, on the corner of the Strand and James Street. Located next to the Pier Head and ferry terminals, Albion House was built in 1898 to house the headquarters of the city’s famous White Star Line shipping company. After relocating to the new building, White Star Line grew to become one of the world’s most famous shipping companies. It is however best remembered for the sinking of its ship, The Titanic, in 1912. Following the disaster, crowds gathered at Albion House as employees read the names of casualties from the balcony, too afraid to face the angry mob gathering below.

Albion House was designed by architects Richard Norman Shaw and J. Francis Doyle and closely resembles their first project, the Scotland Yard building in London. A grade II listed building, Albion House has a distinctive red and white striped façade, comprised of Portland stone and red brick – earning it the local nickname of the ‘streaky bacon’ building. The entrance hall features a mosaic of South America, a continent regularly visited by White Star Line ships. The shipping company merged with rivals Cunard Line in 1927 and relocated – Albion House is now a private office building.
Image Courtesy of Wikimedia and calflier001.