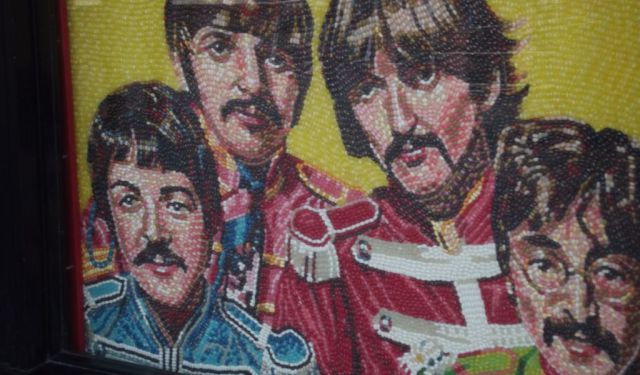 Liverpool is permeated with The Beatles who seem to be everywhere! There are so many places associated with the Fab Four in the city: childhood homes, schools, bars. Some of them are rather unassuming places, at a glance, and thus can be easily overlooked. To prevent this from happening, take this self-guided walk to find the memorable spots in Liverpool no Beatles fan can afford to miss!
Image Courtesy of Flickr and Elliott Brown.
How it works: Download the app "GPSmyCity: Walks in 1K+ Cities" from iTunes App Store or Google Play to your mobile phone or tablet. The app turns your mobile device into a personal tour guide and its built-in GPS navigation functions guide you from one tour stop to next. The app works offline, so no data plan is needed when traveling abroad.

George Harrison, lead guitarist of the legendary Liverpudlian rock band The Beatles, was born at 12 Arnold Grove, in the Wavertree area of the city. The modest two-storey terraced house, tucked away in a suburban cul-de-sac, is a world away from the fame and fortune Harrison found with the Beatles’ astonishing trans-Atlantic success. Harrison’s parents first rented the house in 1930, and paid just ten shillings, or around a dollar, in rent per week. George was the fourth Harrison child, and was born in the house in 1943, at the height of German aerial attacks on the city.

The house at 12 Arnold Grove no longer houses members of the Harrison family. They moved to a new council property when George was seven years old. In his autobiography, the famously spiritual guitarist recalled a tough upbringing in the home, with only a coal fire for heating, an outside toilet and rooms measuring just ten feet squared. Harrison is quoted as saying that, despite the cramped, unglamorous surroundings, the house was a happy family home for him and his siblings. Despite remaining a private residence, 12 Arnold Grove draws hundreds of Beatles fans each year, particularly following Harrison’s untimely death in 2001.

Image Courtesy of Wikimedia and Xgravity23.
2

Mosspits Lane Infants School is the first school little John Lennon attended from November 1945 until May 1946. It is situated at Woolton Road in Wavertree. Julia Lennon, John's mother, raised him alone, so she found a part-time job in the nearby cafe to be able to take him to classes and pick up after. Among the school's pupils were also Len Garry, Pete Shotton and Nigel Walley, members of The Quarrymen band which evolved into The Silver Beatles and later into the legendary Beatles.
Image Courtesy of Flickr and Eliodue.
3

3) The First Home of John Lennon

The first home of John Lennon, The Beatles' singer, songwriter and guitarist, and one of the 20th century most respected musical figures, is found in the eastern suburb of Wavertree. 9 Newcastle Road, a red brick terraced house, is located just a fifteen minute walk from George Harrison’s childhood home on Arnold Grove. Lennon was not born at the house, but at the Liverpool Maternity Hospital, in October 1940. He lived here only as a very young child; his parents, Alfred and Julia Lennon, moved to another home in the city in 1942.

John Lennon, the first and only child of his parents, suffered a difficult upbringing from his very first days at 9 Newcastle Road. His father was a merchant seaman, frequently away from home, and his mother Julia struggled to cope when he was absent, cutting the supply of pay cheques to the family home. Lennon’s aunt, Mimi Smith, ultimately raised concerns with the local Social Services department and, eventually, Lennon went to live with her and his uncle at the Mendips, a semi-detached suburban house he saw as his permanent childhood home. Lennon praised the role of his aunt and mother in his upbringing, and many consider his troubled mother to be one of the greatest influences on his work.

St. Barnabas is a church in the Liverpool suburbs, made famous by the street it stands on – Penny Lane – that served as an inspiration for one of the Beatles’ best loved songs. The church was frequented by the Beatles songwriter and bass player, Paul McCartney, who at one point was even a member of the local choir. The church once had a hall further down the lane, which once played host to a gig from the fledging Beatles. The church welcomes Beatles fans from all over the world each year, and includes a wry nod to the band even in its service – the altar is emblazoned with the famous Beatles lyric “We Can Work It Out”.

St. Barnabas is an Anglican church, serving the Mossley Hill parish. It has existed in its current location since 1914, having previously been housed in a temporary iron building, of which there were many in the early 20th century. The church holds communion on Sundays at 8.30am, 10.30am and 6.30pm, and on Thursdays at 10.00am. There is also a morning prayer service on Tuesdays at 7.15am. If you would like to tread in the footsteps of Paul McCartney, and can hold a tune, the St Barnabas Choir is still in operation and meets every Thursday evening at the church.

Penny Lane, a fairly typical suburban shopping street in the eastern suburb of Mossley Hill, has become world famous thanks to the Beatles hit that bears its name. It was written by Paul McCartney, who attended St Barnabas Church on the street and often met here his childhood friend and fellow Beatle, John Lennon, before catching a bus to Liverpool’s city centre. The many sights referenced in the lyrics can still be found on Penny Lane, including a bus shelter, a barber shop and a fire station. Street signs bearing the famous name were stolen so regularly that the council began painting the street name onto buildings instead.

“Penny Lane” was released in 1967 as a double A-side single with “Strawberry Fields Forever”, another song which references a Liverpool landmark. Beatles producer, George Martin, believed that it was collectively their finest single. It went to No.1 in the US, but only reached No.2 in the UK charts. The street has grown in stature as the result of its Beatles connections, and has become an attraction for tourists and locals alike. It caused some embarrassment to the council officials at one point, when they proposed that all Liverpool streets named after slave traders be renamed, unaware that Penny Lane was indeed named after the local slave trader James Penny. The famous street thus kept its name, whilst the other street names in the city were changed.
Image Courtesy of Flickr and Jen Hunter.
6

Dovedale Primary School is situated on Herondale Road in the Mossley Hill district of Liverpool, and was previously known as two separate schools – Dovedale Junior School and Dovedale Infant School – which have since merged. George Harrison and John Lennon of The Beatles, as well as Lennon's lifelong pal, Pete Shotton, attended this school. John and George were not classmates - they attended Dovedale Primary three years apart.

In September 2015 the two schools formally merged management, and are now recognised as a single school by the Department for Education, known as Dovedale Primary School.
Image Courtesy of Flickr and Keith Webley.
7

The young troublemaker John Lennon studied at the Quarry Bank Grammar School between 1952 and 1957. John's closest friend, Pete Shotton, also frequented Quarry Bank Grammar. Together, they broke all the rules: smoking, fighting, swearing, and so on.

In 1956, John form a band calling it The Quarrymen. Interestingly, the name "Quarrymen" was not taken from the school name, but from the Quarry Bank School song titled, "The Song Of The Quarry". The initial band consisted of John Lennon, Pete Shotton, Ron Davis, Len Garry, Colin Hatton, and Eric Griffiths. Nobody, except John, took the band seriously. Paul McCartney joined The Quarrymen in July 1957, followed later by George Harrison and Stuart Sutcliffe.

In the same year when Quarrymen was formed, Ernest Pobjoy became the headmaster of the school. He allowed the band to play in the building's hall. He was the person who encouraged John in his interest in music and recommended him to the Liverpool College of Art.
Image Courtesy of Flickr and Keith Webley.