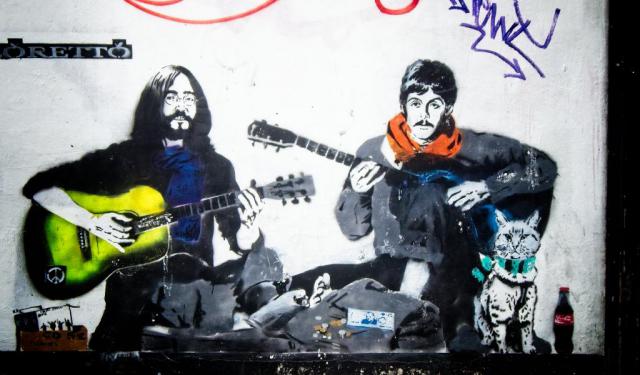 Now that you have been to a good number of spots in Liverpool associated with the Beatles, it is high time to explore the “early days” of the Fab Four in their hometown and see where it all started. On this self-guided walk you will visit the childhood homes of John Lennon and Paul McCartney, and the place where they met and gave birth to the greatest band in the history of rock-n-roll!
Image Courtesy of Flickr and Garry Knight.
How it works: Download the app "GPSmyCity: Walks in 1K+ Cities" from iTunes App Store or Google Play to your mobile phone or tablet. The app turns your mobile device into a personal tour guide and its built-in GPS navigation functions guide you from one tour stop to next. The app works offline, so no data plan is needed when traveling abroad.

Strawberry Field is a former Salvation Army children’s home in the Liverpool suburb of Woolton, situated on Beaconsfield Road, a short walk from John Lennon’s childhood home. The building that existed during Lennon’s time in Liverpool opened in 1936, and was demolished in 1973 due to structural problems to be replaced with purpose-built units. The name of the children’s home was used by Lennon in the single ‘Strawberry Fields Forever’. Released in 1967, it was the first song to be recorded for “Sergeant Pepper’s Lonely Hearts Club Band”, considered by many to be the greatest album of all time. The song is regularly voted as one of the band’s five best.

The song does not directly reference the children’s home, but its hazy, summery melody is believed to be influenced by the afternoons spent by young Lennon in woodland behind the Strawberry Field grounds. Lennon also attended the home’s summer fête with his aunt each year; she claimed that he would listen to the Salvation Army marching band warming up from his bedroom window.

In time, the old red-painted entrance gates on Beaconsfield Road became a place of pilgrimage for Beatles fans. Strawberry Field is opened to the public. There is an exhibition on its history, plus a café and a shop. It is free to visit the Strawberry Field garden, care and shop. There is a small fee for viewing the exhibition.

The gates were stolen on 11 May 2000, allegedly by two men in a transit van, and were sold to an unsuspecting antiques dealer who never realized they were the actual gates from Strawberry Field. He returned them to the police upon request, and they now stand in the grounds of Strawberry Field.

Why You Should Visit:
This is one of the few places associated with the Beatles' childhood that you can visit for free. Do it as part of the whole Beatles experience.

251 Menlove Avenue, otherwise known as Mendips, was the childhood home of the Beatles star John Lennon. A 1930s semi detached property typical of the Liverpudlian suburbs, it is now preserved by the National Trust and features a blue plaque above the living room window. Lennon lived here with his aunt and uncle, Mimi and George Smith, between the ages of 5 and 22. He arrived here as an only child with an absent father and a troubled mother, and left as the leader of one of the world’s most exciting rock-and-roll bands.

Lennon placed great importance of his stable childhood at Mendips during his upbringing. His bedroom was on the first floor with a poster of Elvis Presley on the wall. He used to spend countless hours playing a guitar in his room. Mendips is where he initially composed The Beatles' first UK number one, “Please Please Me.”

Lennon’s widow, Yoko Ono, bought the house in 2002 and then donated it to the National Trust. It was restored to its 1950s appearance and opened to the public in 2003.

Opening times:
The house opens to public seven days a week in peak season, from June to October. During the off season, it opens from Wednesday to Sunday.
Image Courtesy of Wikimedia and Rodhullandemu.
3

Paul McCartney’s childhood home is now a National Trust property in Allerton in south Liverpool. This is the house in which Paul McCartney lived for several years before he rose to fame with the Beatles, and it is labelled by the National Trust as "the birthplace of the Beatles". It was also the home of his brother Mike and the birthplace of the trio the Scaffold, of which Mike was a member.

The house was built and owned by the local authority, and the McCartney family moved in here in 1955 when Paul was at secondary school. The house has been in the ownership of the National Trust since 1995. The Trust calls the house "the birthplace of the Beatles" since this is the place where the Beatles composed and rehearsed their earliest songs.

The property has been meticulously restored to the appearance that McCartney would recognize from his younger years. When he was 14, Paul sat at the family piano and composed the tune for what would eventually be "When I'm 64". John wrote "I Saw Her Standing There" with Paul in this house.

In February 2012, both this house and Lennon's childhood home on Menlove Avenue were Grade II listed by Historic England.
Image Courtesy of Wikimedia and Lipinski.
4

St. Peter’s Church in Woolton, to the east of downtown Liverpool, is one of the city's largest parish churches. A neo-Gothic building first opened in 1887, it is most famous for its connections with the Beatles. A village chapel in the 19th century, the church built a new home for itself following Woolton’s expansion into a large suburb of Liverpool. It has a 90ft high bell tower which is the highest point in the entire city.

The church is famous as the first meeting place of John Lennon and Paul McCartney. Lennon was performing at the church hall on a July evening in 1957 with his skiffle group The Quarrymen. He was introduced to McCartney during an interval, and soon afterwards asked him to join the band – which would eventually become the four-piece Beatles. Lennon and McCartney went on to write numerous No.1 hits, and are almost indisputably seen as the greatest songwriting partnership in the history of rock music.

Lennon also sang occasionally in the church choir. His aunt was a regular attendee here, and his uncle, George Smith, is buried in the churchyard. The cemetery also houses the grave of one Eleanor Rigby, a scullery maid who died in 1939, and who is believed to be the inspiration for the song of the same name.
Image Courtesy of Wikimedia and Lipinski.