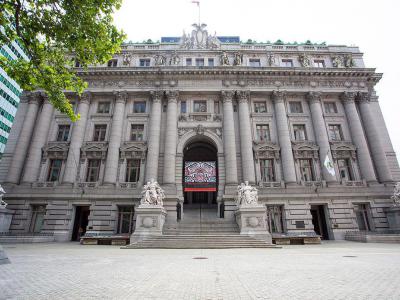 In 1899, Supervising Architect of the Treasury James Knox Taylor invited twenty firms to compete for the commission of the new U.S. Custom House in New York City. Architect Cass Gilbert won the project. His architectural style relies on ideals that include order, harmony, and structure, reflected in Neoclassical and Fine-Arts architecture.

Gilbert's design reflected the aesthetic ideas of the "City Beautiful Movement," themes of patriotism and urbanity. Constructed in 1907, the U.S. Customs House currently houses the Museum of the American Indian, the U.S. Bankruptcy Courts, and the Department of Transportation.

The seven-story building has three-story Corinthian columns. The fifth story is wrapped with an enormous entablature frieze. The seventh story is covered by the mansard roof. Enclosed pediments mark the second-floor windows.

The main entrance consists of a grand staircase flanked by four female statues representing America, Asia, Europe, and Africa, by sculptor Daniel Chester French. Above the columns on the facade are twelve marble figures of maritime nations. Over the windows are heads showing the "eight races" of humanity.

The interior is based on a square plan with a central rotunda surrounded by corridors. The ceremonial Great Hall on the second floor is finished in marble colors and textures. There are curved staircases at both ends with bronze railings, marble treads, and risers. Rooms are decorated in nautical motifs and items.

Ceiling murals by American painter Reginald Marsh show ships entering the harbor. The three-story rotunda is the masterpiece of Spanish engineer Raphael Guastavino. The rotunda was restored in 2001.

The Custom House was renamed in 1990 to commemorate Alexander Hamilton, one of the Founding Fathers of the United States and its first Secretary of the Treasure. The building was listed in the National Register of Historic Places in 1972 and designated a National Historic Landmark in 1976.
Image Courtesy of Wikimedia and AshtonNekolah.