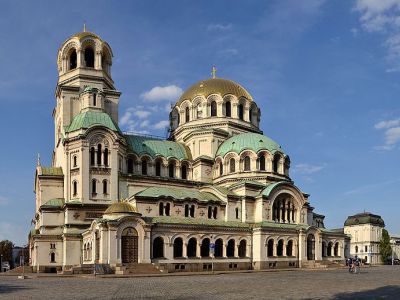 The prophet Isaiah claimed the Lord appoints the princes, "...because they are sacred and I direct them." The second Peskovian Chronicle of 1280 or thereabouts declares Alexander Nevsky had "...the face of Joseph,... the power of Samson and... the wisdom of Solomon." And if that were not enough, "...he...was never defeated."

Prince, politician, warrior and saint, he was a hard act to follow. He earned the name Nevsky by defeating invading Swedes at the battle of the river Neva in 1240. He was 19 at the time. He died in 1263. He was declared a saint of the Orthodox Church in 1547.

The Alexander Nevsky Cathedral of Sophia was started in 1882. The Cathedral was dedicated to the memory of Russian soldiers who died in the Russo-Turkish War of 1877-1878. Their sacrifice brought about the end of Ottoman rule. Only a saint with Nevsky's resume would merit a Cathedral of this size.

Alexander N. Pomerantsev, a Russian eclecticist architect, designed the Cathedral, a neo-Byzantine cross-domed basilica. There are several domes and numerous window arches. The topmost dome is gold. Yes, gold. The cathedral is believed to be one of the largest church buildings in the world.

The golden dome is 148 feet high. The nave roof span is 92 feet. There are 12 bells weighing 23 tons. The interior covers an area of 34,000 square feet and can hold 10,000 people. The cavernous interior holds two royal thrones and a sumptuous-looking pulpit. There is a mosaic mural of Tsar Ferdinand and Queen Eleanor.

There is a museum within the crypt with the largest collection of icons in Europe. By the altar is a case of relics of Alexander Nevsky, featuring a rib.

The Cathedral sits in the midst of enormous Alexander Nevsky Square. Nearby are St. Sofia Church, the monument of the Unknown Soldier, the Bulgarian Academy of Sciences, the National Gallery of Foreign Art, the Bulgarian Parliament and a small flea market.
Image by Pudelek (Marcin Szala) on Wikimedia under Creative Commons License.