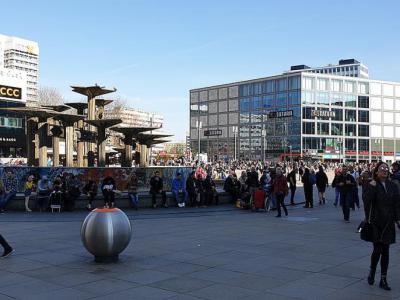 Often called 'Alex' by Berliners, the centre of the old East is inevitable to run across at some point while visiting the city. Originally a cattle market in the middle ages, it was named in honor of a visit of the Russian Emperor Alexander I in 1805. The square became an important commercial hub in the 19th century and, along with Potsdamer Platz, was the heart of Berlin's nightlife in the roaring 1920s. Today, it feels very reminiscent of the 1960s and the peak of the GDR so an interesting place to get a sense of how the high-rise flats looked like before the wall came down.

The large area around the TV Tower tends to be mostly filled with tourists but is also the venue for interesting events (for example, before Christmas, a large part of it gets turned into a Christmas village). The train station is always bustling and all around are shops, bars, and restaurants. The Fountain of Friendship between Peoples and the Neptune Fountain past the TV tower are both good photo spots.

Another interesting sight on Alexanderplatz is the Weltzeituhr, a massive 16-ton clock built in 1969 that shows the times in 148 cities in the world. The attraction fits perfect to Alex and its function as a central meeting point: no need for discussing the correct time when a friend arrives late.

Tip:
If you go, make sure you have seen pictures of how the square was early 20th century and during the Cold War – puts it all in perspective.
Image by Anagoria on Wikimedia under Creative Commons License.