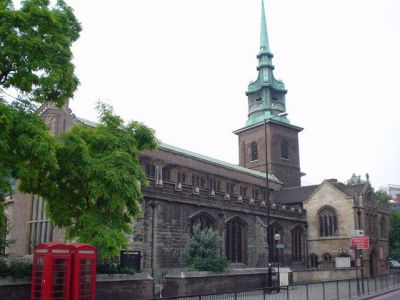 All Hallows-by-the-Tower, also previously dedicated to St Mary the Virgin, is an ancient Anglican church located in Byward Street in the City of London, overlooking the Tower of London. Founded in 675, it is one of the oldest churches in London, and contains inside a 7th-century Anglo-Saxon arch with recycled Roman tiles, the oldest surviving piece of church fabric in the city.

All Hallows-by-the-Tower was first established by the Anglo-Saxon Abbey at Barking and was for many years named after the abbey, as All Hallows Barking. The church was built on the site of a former Roman building, traces of which have been discovered in the crypt. It was expanded and rebuilt several times between the 11th and 15th centuries. Its proximity to the Tower of London meant that it acquired royal connections, with Edward IV making one of its chapels a royal chantry and the beheaded victims of Tower executions being sent for temporary burial at All Hallows.
Image Courtesy of Wikimedia and Lonpicman.
Sight description based on Wikipedia.