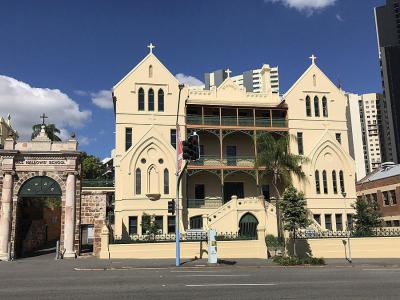 All Hallows School and Convent, Brisbane

All Hallows School and Convent is a P-12 school that lies on three acres of landscaped gardens close to the Brisbane River at its Story Bridge crossing. Opened in 1861, the Catholic school is one of Queensland’s oldest formal education institutions and the oldest running secondary school in the state. It was opened the year after a law was passed in the state allowing religious and other non-state bodies to open secondary schools. Run by the Sisters of Mercy, the school was established to provide education to less fortunate, and often immigrant, young women living in the Fortitude Valley area. From humble beginnings the school is today considered one of the most prestigious schools in Queensland.

The school moved to its current site at the edge of Fortitude Valley on Duncan’s Hill in 1863. The church purchased a pre-existing building and grounds there known as Adderton House for the sum of 6000 pounds. The original building can still be seen to this day, forming part of the convent, and is one of Brisbane’s oldest surviving edifices. The building was extended in 1916 to meet the growing needs of the school. The All Hallows has several high profile Australian women alumni including: Miranda Kerr, model, Tracey Wickham, Olympic swimmer and Thea Astley, author.
Image by TheGirlsNY on Flickr under Creative Commons License.