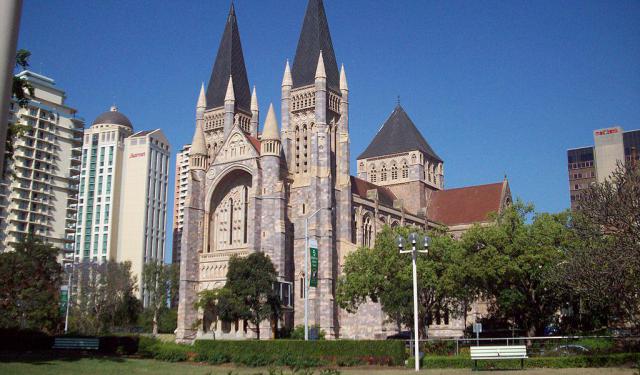 Image by Masalai on Wikimedia under Creative Commons License.

Brisbane has an amazing collection of religious buildings. Renowned for their architectural beauty as well as cultural value, they attract a huge number of visitors. Take this self-guided tour to see the best of these stunning masterpieces, which will impress anyone with their architectural beauty and religious devotion.
How it works: Download the app "GPSmyCity: Walks in 1K+ Cities" from iTunes App Store or Google Play to your mobile phone or tablet. The app turns your mobile device into a personal tour guide and its built-in GPS navigation functions guide you from one tour stop to next. The app works offline, so no data plan is needed when traveling abroad.

Image by Kgbo on Wikimedia under Creative Commons License.
3

Image by Kgbo on Wikimedia under Creative Commons License.
4

The Whitehouse pipe organ was installed in 1915 and has recently undergone renovation. At the turn of the century Miss Fewings Private School for Girls was located in the church basement and this later became one of Queensland’s best regarded private schools – Somerville House. The building is now heritage listed by the state government.
Image by Anne and David on Flickr under Creative Commons License.
5

In the tradition of the Methodist Church there was a heavy emphasis on music and a grand organ was installed. The organ came from England and was enveloped in gold leaf. The design means that the organ and the pulpit are the direct focus of the seated congregation. The church is open Monday to Friday to visitors from 10am to 2pm and you can arrange for tours of the church in advance – it is free, but a small donation is appreciated.
Image by Anne and David on Flickr under Creative Commons License.
6

When Queensland separated from New South Wales in 1859 it was deemed that Brisbane should have its very own grand cathedral. The Catholic diocese set to work and a Gothic Revival cruciform design was approved.

Groundbreaking of the Cathedral of St. Stephen began in 1863. Building of the church was slow and had many issues along the way. The first architect, Benjamin Backhouse, planned a grand cathedral. Those plans were stopped once the foundation was put down and Backhouse was replaced. There were issues with funding.

Richard George Suter was the next architect. He designed the Gothic Revival-style structure that still exists today. He was also eventually replaced by the Hennessy & Hennessy architectural firm. Building of the cathedral would not be completed until 1989.

Inside the church there are many impressive stained windows that came from Munich, Germany, France, England and Ireland. The collection of stained glass is often considered to be the most extensive in Australia.
Image by Kgbo on Wikimedia under Creative Commons License.