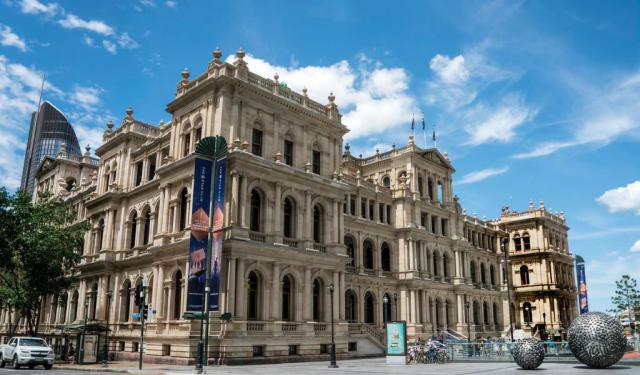 Image by Anne and David on Flickr under Creative Commons License.

Brisbane is home to many places where you can get a real sense of what the city was like in colonial times. Each of these exquisite buildings highlights different types of architecture, whether it be colonial, gothic or neo-classic. Used today for everything from cultural events to local administration, these sites are all must see attractions for any visitor to the city.
How it works: Download the app "GPSmyCity: Walks in 1K+ Cities" from iTunes App Store or Google Play to your mobile phone or tablet. The app turns your mobile device into a personal tour guide and its built-in GPS navigation functions guide you from one tour stop to next. The app works offline, so no data plan is needed when traveling abroad.

1) All Hallows School and Convent

All Hallows School and Convent is a P-12 school that lies on three acres of landscaped gardens close to the Brisbane River at its Story Bridge crossing. Opened in 1861, the Catholic school is one of Queensland’s oldest formal education institutions and the oldest running secondary school in the state. It was opened the year after a law was passed in the state allowing religious and other non-state bodies to open secondary schools. Run by the Sisters of Mercy, the school was established to provide education to less fortunate, and often immigrant, young women living in the Fortitude Valley area. From humble beginnings the school is today considered one of the most prestigious schools in Queensland.

The school moved to its current site at the edge of Fortitude Valley on Duncan’s Hill in 1863. The church purchased a pre-existing building and grounds there known as Adderton House for the sum of 6000 pounds. The original building can still be seen to this day, forming part of the convent, and is one of Brisbane’s oldest surviving edifices. The building was extended in 1916 to meet the growing needs of the school. The All Hallows has several high profile Australian women alumni including: Miranda Kerr, model, Tracey Wickham, Olympic swimmer and Thea Astley, author.

Image by TheGirlsNY on Flickr under Creative Commons License.
2

Image by Tatters on Flickr under Creative Commons License.
3

Customs House is one of Brisbane’s most beautiful colonial buildings and its location on the shores of the Brisbane River make it even more impressive. The building once played a key role in the city’s economics – it was built in 1886 to replace a humble custom’s house at Petrie Bight. It was designed by Charles McLay of the Colonial Architect’s Office and is a magnificent example of the Victorian Free Classical style. The exterior of the building is dominated by the impressive copper dome roof and its beautiful portico.

The building is now owned by the University of Queensland and is used for public and private functions – you can often find art exhibitions or music concerts being held inside. Some of the rooms are open to visitors to enjoy and take in the significant history of the building and remind us that Brisbane was once a great port city. Within Customs House, the Long Room is the grandest and there are historical displays inside showing the building as it was in its heyday. There is also a charming restaurant that can be visited by the public and provides the perfect chance to imagine Brisbane as it was in Victorian times.

Image by Paleontour on Flickr under Creative Commons License.
4

In the 1920s the St. Andrews underwent extensive renovations with a more ornate entrance from Ann Street into the sanctuary and from Creek Street into the Hall added. In this same period the stunning stained glass windows of the church were finally completed. The church was most recently refurbished in 1999. One of the main features of the façade is the bell tower, which is still used to call the congregation to church on Sundays.
Image by David Jackmanson on Flickr under Creative Commons License.
5

5) The Old Windmill (must see)

The Old Windmill is Queensland’s oldest surviving building and one of the very few convict built buildings to remain in the city. It was constructed in 1824 to grind maize and wheat to feed the convict population of the colony. Originally a treadmill the mill, but the cloth sails were added a couple of months after its inauguration; however the treadmill was still put to use as a form of punishment. In 1841 two aboriginal men were hung from the windmill after they were deemed to have been guilty of murdering two members of a surveying party at Mount Lindsay.

Around 1849 the windmill was decommissioned and was put to use as Queensland’s first museum and during the 1930s and 1940s it was used as a broadcasting tower. In fact, it is thought that this was the site of the very first TV broadcast in Australia in 1934. In 1866 a cannon was installed at the windmill and was fired each day at precisely 1pm for the residents of the colony to set their watches by.
Image by Figaro on Wikimedia under Creative Commons License.
6

Brisbane City Hall is located in King George Square in city’s CBD and is the center of the Brisbane City Council. The building is widely considered to be one of Brisbane’s best and one of the most ornate and beautiful of Australia’s city halls. The foundation stone of the building was laid in 1920 and construction was completed by 1930. For many years the hall was Brisbane’s tallest building and to this day you can take the elevator to the top of the clock tower and get an impressive panoramic view over the city. The viewing platform is open 10am to 3pm every day for free. The clock tower is 91 meters above the ground and was inspired by St. Mark’s Campanile in Venice, Italy.

Built in the Italian Renaissance style, there is much of interest to see in the building. Above the Corinthian columns at the entrance to the building is the ornately carved tympanum, which was carved by Sculptor Daphne Mayo in the 1930s. It features scenes of the settlement of Queensland with cattle drovers extending out into the lands filled with kangaroos. Inside there are many beautiful rooms, but the highlight is the main auditorium inspired by the Pantheon in Rome.
Image by Lacrimosus on Wikimedia under Creative Commons License.
7

When you enter the main entrance you are greeted by a Minton tile European imported foyer and grand staircase, which leads up to the Chambers and the Reading Room. In the Red Chamber, which was the Upper House until it was abolished in 1922, you find Waterford crystal chandeliers, which were presented to the parliament by Queen Victoria. Stained glass in both the Green and Red Chambers depict the monarch. On a Parliament House tour you can view the mace, which is a stunning gold and silver creation one meter long and weighing 7.7 kilograms. It features many Queensland opals and sapphires and is placed in the Green Chamber when the Parliament is in session. There are guided tours held every Saturday and Sunday between 10am and 2pm.
Image by James Cridland on Flickr under Creative Commons License.