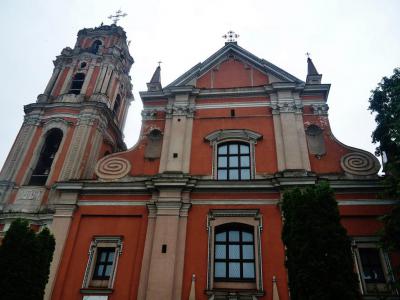 All Saints Church is a Baroque style church in Vilnius, Lithuania. All Saints church was built between 1620-1630 and was adopted for Carmelites' needs. In the second half of the 17th century, the church was linked with a monastery and formed a single complex.

The bell tower is high and massive with elaborate decorations. After a fire in the 18th century, it was restored and finished with a rococo-style dome roof. Marcin Knackfus prepared project for the church's altar. Above the high altar rises another altar reminiscent of a royal throne with a canopy. A belfry was erected and the sculptures in the interior were created in the 18th century. In 1859 the polychrome interior décor was enriched.

A large old-regulation Carmelite monastery adjoins the church; it is built by adapting existing buildings. In 1631–32, the main two-storey building following the street was completed; there are also several buildings of a later period and a two-storey novitiate house with a small courtyard at the city wall.

The Church of all Saints is at the end of Szpitalna St., where the main gate to the Jewish ghetto was. During World War II, there was a tunnel through the sewers connecting the church with the ghetto. The priest of the church would provide bread to be taken into the ghetto through the tunnel. He also hid some Jews smuggled out of the ghetto through the tunnel. There were also Christian Lithuanians who helped smuggle Litvaks food into the ghetto. In Soviet times the church housed a museum of folk art after the reconstruction between 1967 and 1975.
Image by Zairon on Wikimedia under Creative Commons License.
Sight description based on wikipedia