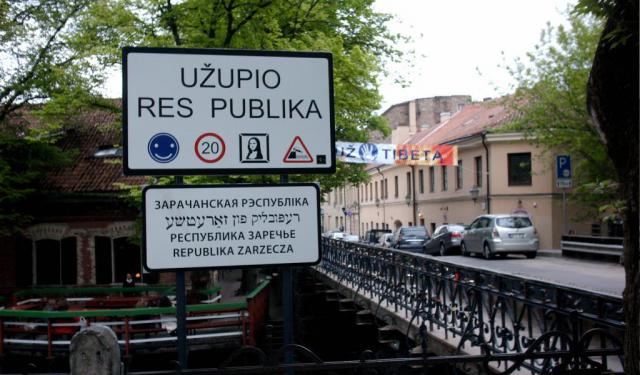 A tiny isolated area and a former suburb, which now forms part of the Old Town of Vilnius, the Uzupis district is often compared, for its bohemian and laissez-faire atmosphere, to Montmartre of Paris and Freetown Christiania of Copenhagen. Similarly to the latter, in 1997, the district declared itself an independent republic; the tongue-in-cheek constitution of the self-proclaimed “republic”, translated into more than 40 languages, can be seen mounted on wall plaques along Paupio Street.

This part of Vilnius has been popular with artists since the Soviet times; many local painters and sculptors used to live or have their workshops here. Nowadays, artists’ studios are still very present, lining the narrow streets alongside art galleries, designer boutiques, hip cafes, and global eateries.

In equal measure the neighborhood is dotted with numerous street murals and installations like a bronze trumpeting angel erected on the main square, symbolizing the rebirth and artistic freedom of the quarter. Another symbol of Uzupis is a riverbank mermaid sculpture. Locals claim that if you stare into the eyes of the mermaid, prior to crossing into the republic via the Uzupis Bridge, you will never want to leave. Some say, she is the one who lured them here in the first place.

Passing down the bridge in an easterly direction, along Užupio Street, behind the gate on the right side you will see the church of St. Bartholomew, a Roman Catholic basilica built in the 17th century and rebuilt in 1824. Behind it, at a small park, where back in the day used to be a market, the street splits into Polotsko Street. From here starts the old Batory tract to Polotsk. First turn to the right leads to the Bernardine cemetery. This leafy cemetery, dated from 1810, is the burial place of numerous eminent locals and is currently listed as the Cultural Property of the Republic of Lithuania.

If you take interest in this sort of places and wish to explore the “Republic of Uzupis” in more detail, embark on this self-guided walking tour!
Image Courtesy of Wikimedia and Keith Ruffles.
How it works: Download the app "GPSmyCity: Walks in 1K+ Cities" from iTunes App Store or Google Play to your mobile phone or tablet. The app turns your mobile device into a personal tour guide and its built-in GPS navigation functions guide you from one tour stop to next. The app works offline, so no data plan is needed when traveling abroad.

The Uzupis Mermaid is a bronze statue of a mermaid located in Old Town. The statue was crafted by artist and sculptor Romas Vilčiauskas in 2002. Tradition states that anyone who falls victims to the charms of this mermaid statue is destined to live in Uzupis forever.

Tourist can view the mermaid inside of a brick enclave looking over the Vilnia River. The best place to view the mermaid is from the Bridge of Uzupis, a love lock bridge where couples seal their love by placing a padlock along the wrought iron railing. There is also a cafe with outdoor dining that is situated with a direct view of the statue.

The bridge is a popular spot for wedding photos so don't be surprised to see happy couples getting their pictures taken with the mermaid in the background. She is a symbol of love and hope, which makes her the ideal figure to have in a photo with a happy couple.

Image Courtesy of Wikimedia and Mmh.
2

The Bridge of Uzupis is a small bridge that crosses the Vilnia River. It is one of the world's great love lock bridges, which is a spot that couples use to seal their love. A happy couple, especially those who are newly married, will place a padlock on the bridge with their names or initials written or etched in the metal.

Beneath the Bridge of Uzupis is the Uzupis Mermaid. Leaning over the bridge provides a great vantage point for this sculpture. Just before reaching the bridge, tourists will see a sign showing "Užupio Res Publica," or in English, Uzupis Free Republic. Don't forget to snap a picture.

The bridge leads from Vilnius to Uzupis, which claims to be a free republic within the city. Uzupis has its own president, government, mayor and constitution. It even has its own official currency. This was started as an April Fools' Day joke, but is now taken somewhat seriously. However, the primary purpose of Uzupis is to be a haven for art and artists.

The Uzupis Art Incubator, often referred to simply as the Art Incubator or UMI, is the first of its kind in the Baltic states. Having been in continuous use since 2002, it is the only alternative artistic organization and arts center in the country. Though the existing incubator opened in 2002, spaces like this one have been in use since 1991. Artists would gather in an abandoned building in Uzupis to work and find inspiration.

An art incubator is a facility that provides growth for small and emerging artists. It offers low-cost work space for artists and gallery space to display the work created at the incubator and elsewhere. The Uzupis Art Incubator is an open-air gallery with art installations and sculptures located throughout. It is also a place for artists to work and socialize with little cost.

The Art Incubator is open from Monday through Friday from 9 AM to 6 PM. It is closed on all major holidays. The incubator is free and open to the public so anyone can pop-in to see what artists are working on.
Image Courtesy of Wikimedia and Umnik.
4

Tibet Square, known as Tibeto Skveras in Lithuanian, is a public square located near the Old Town in Uzupis. It was founded on an abandoned lot after the Dalai Lama visited Uzupis and was given an honorary citizenship of the symbolic free republic. The primary feature of the square is a mandala sculpture created by Rimantas Sakalauskas.

It was stated by the mayor that the plaque established Vilnius as a city that is open to all people regardless of nationality, language or religion.
Image Courtesy of Wikimedia and Jodkovska.
5

A bronze sculpture of Angel Gabriel blowing a trumpet, mounted on an 8.5-meter column amid the main square of Uzupis, marks the spot previously occupied by The Chapel of the Savior, demolished in the 1960s. The angel symbolizes the rebirth and artistic freedom of the quarter, much as Lithuania’s freedom and independence regained after the breakup of the Soviet Union.

Previously, a temporary sculpture of a huge egg stood in its place. After being replaced by the statue, the egg was sold at an auction organized by the Uzupis Angel Club. The monument's column was erected in 2001. The silver-plated, gilded bronze angel was added in 2002. Funds for its construction (about half a million litas) were generated through public subscription.

Authors of the monument are the local sculptor Romas Vilčiauskas, who is also the creator of the Uzupis Mermaid, and architect Algirdas Umbrasas. Ever since its opening, the bronze angel has been a symbol of Uzupis and a popular meeting place.

The Republic of Uzupis celebrates the date of its establishment on April 1. On this day, among other festivities, the ancient water column in front of the Uzupis Angel turns into a beer tap.
Image Courtesy of Wikimedia and Wojsyl.
Sight description based on Wikipedia.
6

St. Bartholemew the Apostle Church, known as Šv. apaštalo Baltramiejaus bažnyčia in Lithuanian, is a small, Catholic church in Uzupis. The grounds were originally home to a wooden church that belonged to the Black Augustines. That church burned in 1665.

A prayer building for monks was built in 1778 by architect Marcin Knakfus. This was demolished and the current church building was erected in 1824. The modest, brick church was built using plans from architect Karol Podczaszyński. The USSR closed the church in 1949.

The church was used as a sculpture workshop during Soviet occupation. It was gifted to the Belarusian Catholic community in 1997 to be used as a church once more. Services at the church are held in both Belarusian and Polish.

Visitors are welcome to explore the church with no entrance fee. It can be difficult to find as it is nestled among the nearby homes, restaurants and boutiques, but the tourist is rewarded with a lovely church with a colorful altar and an exquisite outdoor environment with numerous statues, reliefs and a large crucifix.
Image Courtesy of Wikimedia and Jodkovska.
7

The Bernardine Cemetery is one of the three oldest cemeteries in Vilnius. It covers about 38,000 square metres and has an estimated 14,000 burial sites. It was established in 1810 by the Bernardine monks of the Church of St. Francis of Assisi, just east of the city center in the Užupis district, and is situated on an embankment of the Vilnia river. Its development was a consequence of Tsarist authorities of the Russian Empire prohibiting burying the dead near churches. The residents of Vilnius moved the cemetery to what was then the outskirts of the city.

The Columbaria were built on the east and west sides of the cemetery. The cemetery was expanded in 1860. After the Second World War the cemetery was abandoned for the most part and began to deteriorate. It was closed in the 1970s and since then until recently it had remained almost unchanged. Many of the oldest graves had sunk into the ground and became covered in moss. The eastern columbarium had almost entirely disappeared. Restoration and reconstruction of its buildings and monuments, including the western columbarium, began in the late 1990s.

Beginning in 2005, on the initiative of the Adam Mickiewicz conservation work on the cemetery commenced with the aim of restoring the necropolis for 2010, the two hundredth anniversary of the founding. More than a hundred historic tombstones have been renovated, most of them those of Polish and Lithuanian participants of the January Uprising, Home Army soldiers and the past faculty of the Stefan Batory University. Further renovations are planned.
Image Courtesy of Wikimedia and Alma Pater.
Sight description based on Wikipedia.

The historic and present-day capital of Lithuania, Vilnius is known for the architecture in its Old Town, a UNESCO World Heritage Site since 1994.

The name of the city originates from the River Vilnia (which is the Lithuanian for “ripple”). According to legend, Grand Duke Gediminas (c. 1275–1341), having hunted near the confluence of the Vilnia and Neris rivers, saw a dream in which a...  view more