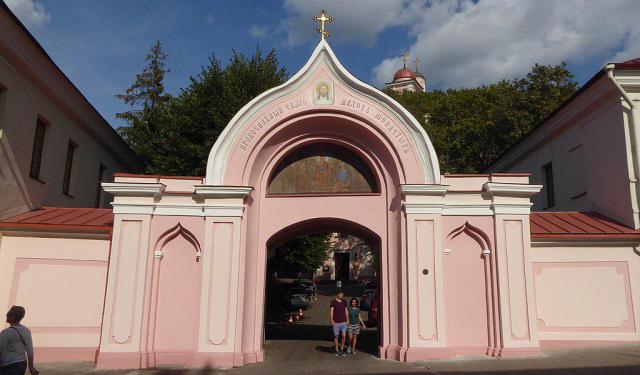 Image by Syrio on Wikimedia under Creative Commons License.

Vilnius is well-known as the seat of the Roman Catholic Archdiocese of Vilnius. Here you will discover a large number of gorgeous religious buildings designed in different architectural styles such as Gothic, Baroque, and several other designs.
How it works: Download the app "GPSmyCity: Walks in 1K+ Cities" from iTunes App Store or Google Play to your mobile phone or tablet. The app turns your mobile device into a personal tour guide and its built-in GPS navigation functions guide you from one tour stop to next. The app works offline, so no data plan is needed when traveling abroad.

St. Michael's Church is the only church in Vilnius designed in the Renaissance style. It was built between 1594 and 1625. The interior of the church is solemn and very rich. Today, the church also houses the Architecture Museum.
Image by Alma Pater on Wikimedia under Creative Commons License.
2

2) Cathedral of the Theotokos

The Cathedral of the Theotokos in Vilnius is the main Orthodox Christian church of Lithuania. The Cathedral of the Theotokos is one of the most ancient churches of Vilnius, built before the christianization of Lithuania when the Grand Duchy of Lithuania was the last pagan state in Europe. It became an important spiritual center for the growing Christian population of the duchy. The cathedral of the Theotokos was damaged during the Second World War but was restored in 1948, although its renovations were not completed until 1957. Today the cathedral belongs to the Russian Orthodox Church and was once again renovated in 1998. Its services are attended mostly by ethnic Russian and Belarusian residents of Vilnius.
Image by Juliux on Wikimedia under Creative Commons License.
Sight description based on wikipedia
3

St. Paraskeva Church is an Orthodox church in Vilnius. The first Orthodox church of St. Paraskeva was constructed on demand of prince Algirdas' first wife, a Russian princess Anne, who was subsequently buried there in 1346. According to the legend, the church was built on the site of a temple to the pagan god, Ragutis. At first, a Museum of Atheism was to be opened there, but in the end the church was turned into a gallery of Lithuanian folk art. The church was given back to the Orthodox Church only in 1990 and reconsecrated by Metropolitan Khrisostom the following year. Since then it has been an auxiliary church of the Cathedral of the Theotokos.
Image by Algirdas on Wikimedia under Creative Commons License.
Sight description based on wikipedia
4

St. Casimir's Church was named after the patron saint of Lithuania, Prince Casimir Jagiellon. It was founded in 1604 by the Jesuits. St. Casimir's church is one of the oldest Baroque churches in Vilnius; however it also displays Gothic and Renaissance elements. The church is constructed in the form of a Latin cross, according to the style of Il Gesu church in Rome.
Image by Umnik on Wikimedia under Creative Commons License.
Sight description based on wikipedia
5

The cupola of the Holy Spirit Church rises above Old Town and is easily recognized from the surrounding streets. The church was built in 1408 and is now considered an architectural monument of late baroque in Lithuania. Holy Spirit Orthodox Church houses a remarkable crucifix, "brought to life" by the incoming daylight. The original painting of the Divine Mercy is enshrined above the altar. Pope John Paul II himself visited the shrine and prayed before the sacred image in 1993.
Image by Alma Pater on Wikimedia under Creative Commons License.
6

All Saints Church is a Baroque style church in Vilnius, Lithuania. All Saints church was built between 1620-1630 and was adopted for Carmelites' needs. In the second half of the 17th century, the church was linked with a monastery and formed a single complex. The bell tower is high and massive with elaborate decorations. A large old rule Carmelite friary, constructed using the existing buildings is located near the church. The Church of all Saints is at the end of Szpitalna St., where the main gate to the Jewish ghetto was.
Image by Alma Pater on Wikimedia under Creative Commons License.
Sight description based on wikipedia
7

St. Nicholas Church is the oldest surviving church in Lithuania, built in the Old Town of the capital city Vilnius. Originally built in the 14th century, it is mentioned in wiritng for the first time in 1387. Archaeologists believe that the same Roman Catholic church survived till the present day. Externally, the church represents the Brick Gothic style, while its interior has been renovated several times. The church belfry was built in the 17th century in the Baroque style.
Image by Julius on Wikimedia under Creative Commons License.
Sight description based on wikipedia