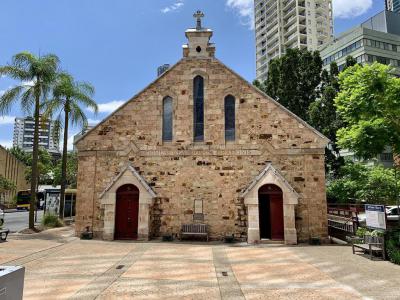 During its long history it has had high profile parishioners including two state premiers – Sir James Dickson and Sir Robert Ramsey McKenzie. The stained glass windows are the oldest in Queensland and there are significant sculptured art by well known Depression era sculptor Daphne Mayo. The church is now a heritage listed building in recognition of the important role it played in colonial Queensland. There are many scheduled services throughout the week and the church is open to visitors at other times. It is sometimes possible to find a person who can provide an informal tour of the interior and grounds of the church.
Image by Cyron on Flickr under Creative Commons License.

Apart from its beautiful colonial era buildings, Brisbane is also home to a number of notable contemporary structures, some of which are recognized worldwide for their design. Take our tour to see the best modern buildings in Brisbane.