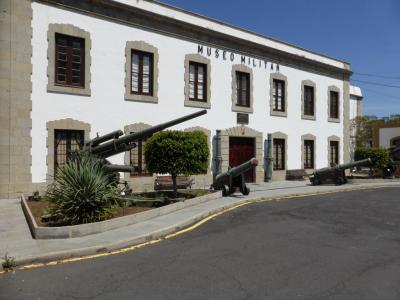 Regional Military Museum is located in the historic Almeida Castle completed in 1884 occupying the Almeida quarter, in the northern part of the city.

In 1854, the construction of the Fort of Almeyda was decided, and on April 21 the engineer colonel Clavijo y Plo presented his project, approved on September 22 of that year, starting the work on November 6. In 1884 the work was terminated, although by then it no longer had much military value, due to improvements in artillery techniques and population growth.

To the west it has a fort that dominates with its fires a small valley formed by the mountains that rise in its vicinity. It belongs to the Vauban system , its semicircular plan being closed by the diameter with the main facade, with two floors. To the east there is a single-storey corrugated front and a battery was built on the upper esplanade; to the north another crenellated front and three casemates with two floors; in the west three single-storey casemates and in the gorge the defensive barracks.

The Military Museum (Museo Militar) was founded in 1988 and is one of the best Canarien cartography research centers, and a great depository of armaments and objects invoking the military history of the islands, with respect to the successful defence of the city. The most referred exhibit items are the El Tigre (The Tiger) artillery-type weapon and a scale replica of the flagship Theseus. There is also an exposition dedicated to the life of Admiral Nelson, a collection of flags as well as early paintings by Canarien artists. Museum hours: Tuesday - Friday: 10 am - 3 pm; Saturday - Sunday: 10 am - 2 pm.
Image by CARLOS TEIXIDOR CADENAS on Wikimedia under Creative Commons License.